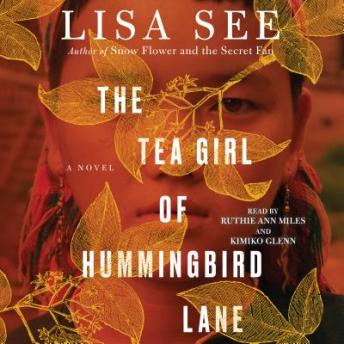 The Tea Girl of Hummingbird Lane: A Novel

From #1 New York Times bestselling author Lisa See, “one of those special writers capable of delivering both poetry and plot” (The New York Times Book Review), a moving novel about tradition, tea farming, and the bonds between mothers and daughters.

In their remote mountain village, Li-yan and her family align their lives around the seasons and the farming of tea. For the Akha people, ensconced in ritual and routine, life goes on as it has for generations—until a stranger appears at the village gate in a jeep, the first automobile any of the villagers has ever seen.

The stranger’s arrival marks the first entrance of the modern world in the lives of the Akha people. Slowly, Li-yan, one of the few educated girls on her mountain, begins to reject the customs that shaped her early life. When she has a baby out of wedlock—conceived with a man her parents consider a poor choice—she rejects the tradition that would compel her to give the child over to be killed, and instead leaves her, wrapped in a blanket with a tea cake tucked in its folds, near an orphanage in a nearby city.

As Li-yan comes into herself, leaving her insular village for an education, a business, and city life, her daughter, Haley, is raised in California by loving adoptive parents. Despite her privileged childhood, Haley wonders about her origins. Across the ocean Li-yan longs for her lost daughter. Over the course of years, each searches for meaning in the study of Pu’er, the tea that has shaped their family’s destiny for centuries.

A powerful story about circumstances, culture, and distance, The Tea Girl of Hummingbird Lane paints an unforgettable portrait of a little known region and its people and celebrates the bond of family.

Learning about the ethnic Chinese, pur'eh, and aspects of Chinese history all woven into a good story made this novel memorable. I would definitely recommend this book.

I enjoyed listening to this book but sadly disappointed with the ending (there wasn't enough to it). After hearing every woven detail of this story I felt short changed with such a short ending and would have enjoyed a bit of depth to the conclusion.

Such a great story interwoven into a fascinating culture. I learned so much and will never think of foreign born adoptees the same again. The narration was fantastic.

Another masterpiece by Lisa See. I will be absorbed in this story long after I have met its end.

Another great book from my favorite author. I really enjoyed it.

After this book you will plant your own tea tree. Great description of customs and life styles.

One of my all time favorite writers. Beautiful story, beautifully written.

I loved loved the 1st half best…learning about the “Ahka” culture wrapped into a coming of of age story during China’s transformation and the contrast of village and city values. I loved the main character and her family (sister-in-laws 1, 2 and 3, and AMA). I did not like how neatly everything unfolded in a fairytale ending. I did not like the male characters…a little one dimensional. What was a messy and challenging start turned a little into fantasy romance. Nothing is really a big surprise. I was, however, 100% engaged the whole time and loved the narration —plus I have a newfound taste for tea. ;-)

It was a great book, but the end was weak.

I loved this book!! I loved the narration which made the book more real than it would have been if I had tried to muddle thru some of the words on my own. The entire book was enlightening and educating and the ending was perfect!

A wonderful novel with great characters, I loved the insight in ethnic minorities in China, the way they lived, how the revolution changed them in a bad and good way, how long to hang on to traditions and customs . The voices are well picked and match the characters in the book. A fantastic read and listen to if you enjoy history, culture and tragedy and triumph.

The details of the places were so vivid in my mind even though I've never been there. Wonderful history and cultural lesson.

Excellent read, wonderfully narrated, intimate, subtle and so good I'm listening to it again...I never do that!

This title is due for release on March 21, 2017
We'll send you an email as soon as it is available!