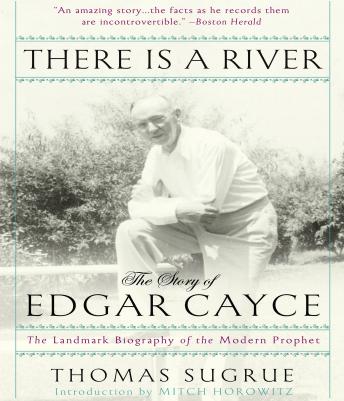 There is a River: The Story of Edgar Cayce

A new edition of the landmark, worldwide bestseller on the life of the famed medical clairvoyant and founding father of the New Age: Edgar Cayce.

Edgar Cayce (1877-1945) is known to millions today as the grandfather of the New Age. A medical clairvoyant, psychic, and Christian mystic, Cayce provided medical, psychological, and spiritual advice to thousands of people who swore by the effectiveness of his trance-based readings.

But Cayce was not always a household name. When a young, skeptical journalist named Thomas Sugrue first met Cayce in 1927 the world had not yet heard of the 'sleeping prophet.” During years of unique access, Sugrue completed his landmark biography, which on its publication in 1942 brought national attention to Cayce and stands as the sole record written during the seer's lifetime.

This edition includes a new introduction by historian Mitch Horowitz that highlights the enduring significance of Cayce's message and the role this book played in its dissemination.

I’m a big Cayce fan and enjoy books regarding him. This one was decent although the narration was a little ehhh.

Edgar Cayce was such an amazing man, no wonder he was given such a gift of being a messenger for medical advice from a higher source. The case studies, diagnoses, and natural treatments were fascinating. The subconscious mind is capable of miracles.

This title is due for release on July 1, 2015
We'll send you an email as soon as it is available!