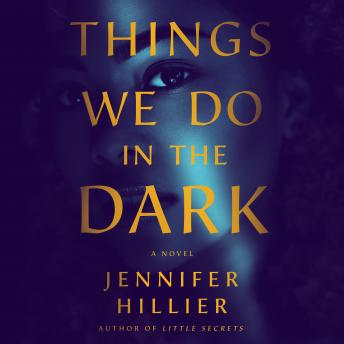 The Things We Do in the Dark: A Novel

This audiobook includes a bonus conversation between the author and actor Brandi Cyrus.

Things We Do in the Dark is a brilliant new thriller from Jennifer Hillier, the award-winning author of the breakout novels Little Secrets and Jar of Hearts. Paris Peralta is suspected of killing her celebrity husband, and her long-hidden past now threatens to destroy her future.

When Paris Peralta is arrested in her own bathroom – covered in blood, holding a straight razor, her celebrity husband dead in the bathtub behind her – she knows she'll be charged with murder. But as bad as this looks, it's not what worries her the most. With the unwanted media attention now surrounding her, it's only a matter of time before someone from her long hidden past recognizes her and destroys the new life she's worked so hard to build, along with any chance of a future.

Twenty-five years earlier, Ruby Reyes, known as the Ice Queen, was convicted of a similar murder in a trial that riveted Canada in the early nineties. Reyes knows who Paris really is, and when she's unexpectedly released from prison, she threatens to expose all of Paris's secrets. Left with no other choice, Paris must finally confront the dark past she escaped, once and for all.

Captivating from the start! Lots of twists that keep you guessing to the very end!! Definitely a binge read!

Kept me captivated. Great characters. Maybe triggering for some people due to child sex abuse.

This title is due for release on July 19, 2022
We'll send you an email as soon as it is available!