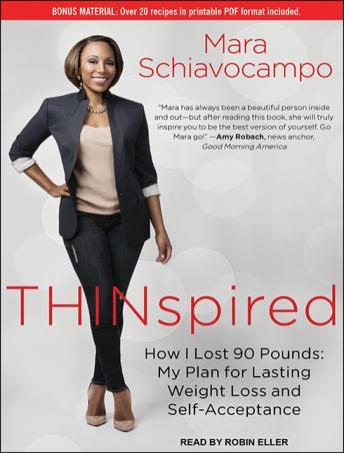 Thinspired: How I Lost 90 Pounds: My Plan for Lasting Weight Loss and Self-acceptance

Like so many people, Mara Schiavocampo had struggled with weight for most of her life. She tried every diet on the planet, suffered a debilitating eating disorder, joined a bizarre food cult, took dangerous pills, worked out for insane amounts of time-and still tipped the scales at nearly 230 pounds. But more than reaching a healthy weight, Mara wanted peace and freedom from the constant mental torment brought on by food. A healthy and effortless way of life-for the rest of her life.

And that's what she found. While juggling a marriage, new baby, and a budding television career as a correspondent on NBC, Mara 'accidentally' stumbled onto a formula that worked for her. She lost ninety pounds in two years and is now stronger and fitter-and, most importantly, happier-than ever.

In Thinspired, Mara shares her weight-loss secrets and the formula for her success plan. Instead of focusing strictly on do's and don'ts, she talks about eliminating the foods that have control over you-whether that's wine, flour products, dairy, or sugar. By following in Mara's footsteps, you'll lose the pounds and gain back your energy, control, health, and happiness.

I read many books on health and nutrition. I am not an expert but have battled chronic dieting and binge eating for most of my life. Mara's book is beautifully written, insightful, truthful, and comprehensive. Enjoyed how she connected her personal journey with good science about the behaviors necessary for lasting weight loss. I will be purchasing the hard copy because I loved it that much!

This title is due for release on March 24, 2015
We'll send you an email as soon as it is available!