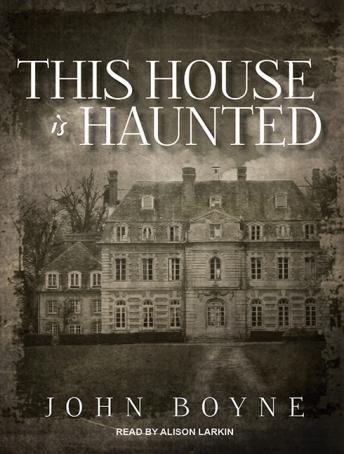 This House Is Haunted

Written in Dickensian prose, This House Is Haunted is a striking homage to the classic nineteenth-century ghost story. Set in Norfolk in 1867, Eliza Caine responds to an ad for a governess position at Gaudlin Hall. When she arrives at the hall, shaken by an unsettling disturbance that occurred during her travels, she is greeted by the two children now in her care, Isabella and Eustace. There is no adult present to represent her mysterious employer, and the children offer no explanation. Later that night in her room, another terrifying experience further reinforces the sense that something is very wrong.

From the moment Eliza rises the following morning, her every step seems dogged by a malign presence that lives within Gaudlin's walls. Eliza realizes that if she and the children are to survive its violent attentions, she must first uncover the hall's long-buried secrets and confront the demons of its past. Clever, captivating, and witty, This House Is Haunted is pure entertainment with a catch.

I loved Eliza Kane!! Strong woman. I was slightly disappointed in the ending. It would be a spoiler if I said why. Enjoyed the book! I loved that it was a ghost story , not a slasher or gory detailed mess.

It was an interesting book. A good old fashion haunting. Very mysterious too. I really enjoyed the narrator. Very nice reading voice!

Narrator really helped immerse me in the story! Fun and not too scary.

This is a really good old fashioned haunting story. I loved the narrator!!

This was a great ghost story. The surrounding story was interesting, and moved along at a good pace. I enjoyed this very much and looked forward to driving so I could listen to it.

I loved the way the narrator told the story. Great entertainment!

It was a good book…didn’t seem very scary while reading but I did think about certain moments from it at night. Ha! The characters were great and gave an air of distrust…Eliza was strong and unmoved…but I was also a bit disappointed with the ending.

I really liked this book.

Surprisingly good. I enjoyed the elaborate decorum of the English culture, and that the main character gets more “progressive” as the book goes on. Narrator does a great job and it was never boring.

This title is due for release on October 21, 2013
We'll send you an email as soon as it is available!