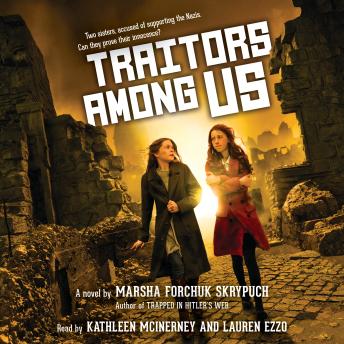 World War II may be over. But two sisters are far from safe.

Inspired by true events, this is the latest gripping and powerful novel from the acclaimed author of Making Bombs for Hitler.Sisters Krystia and Maria have been through the worst — or so they think. World War II ravaged their native Ukraine, but they bothsurvived, and are now reunited in a displaced persons camp.Then another girl accuses the sisters of being Nazi collaborators. Nothing could be further from the truth; during the horrors ofthe war, both sisters resisted the Nazis and everything they stood for. But the Soviets, who are now in charge, don’t listen to thesisters’ protests. Krystia and Maria are taken away and interrogated for crimes they never committed.Caught in a dangerous trap, the sisters must look to each other for strength and perseverance. Can they convince their captorsthat they’re innocent — or escape to safety before it’s too late? Traitors Among Us continues the story of sisters Krystia and Mariafrom Don’t Tell the Nazis and Trapped in Hitler’s Web.

This title is due for release on September 7, 2021
We'll send you an email as soon as it is available!