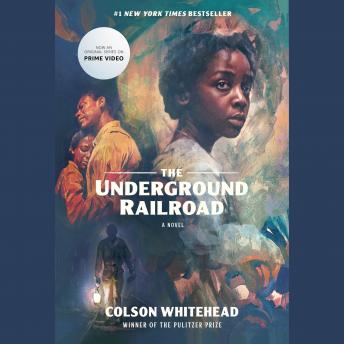 Winner of the Pulitzer Prize and the National Book Award, the #1 New York Times bestseller from Colson Whitehead, a magnificent tour de force chronicling a young slave's adventures as she makes a desperate bid for freedom in the antebellum South. Now an original Amazon Prime Video series directed by Barry Jenkins.

Cora is a slave on a cotton plantation in Georgia. Life is hell for all the slaves, but especially bad for Cora; an outcast even among her fellow Africans, she is coming into womanhood—where even greater pain awaits. When Caesar, a recent arrival from Virginia, tells her about the Underground Railroad, they decide to take a terrifying risk and escape. Matters do not go as planned—Cora kills a young white boy who tries to capture her. Though they manage to find a station and head north, they are being hunted.

In Whitehead’s ingenious conception, the Underground Railroad is no mere metaphor—engineers and conductors operate a secret network of tracks and tunnels beneath the Southern soil. Cora and Caesar’s first stop is South Carolina, in a city that initially seems like a haven. But the city’s placid surface masks an insidious scheme designed for its black denizens. And even worse: Ridgeway, the relentless slave catcher, is close on their heels. Forced to flee again, Cora embarks on a harrowing flight, state by state, seeking true freedom.

Like the protagonist of Gulliver’s Travels, Cora encounters different worlds at each stage of her journey—hers is an odyssey through time as well as space. As Whitehead brilliantly re-creates the unique terrors for black people in the pre–Civil War era, his narrative seamlessly weaves the saga of America from the brutal importation of Africans to the unfulfilled promises of the present day. The Underground Railroad is at once a kinetic adventure tale of one woman’s ferocious will to escape the horrors of bondage and a shattering, powerful meditation on the history we all share.

Best book I’ve read in a while. Wanted to find out what happened to amazing, strong Cora.

Slow beginning, but overall a very good book. I enjoyed the narration and was captivated once it picked up.

Very well written and narrated. Learned so much. Agree completely with "Great book a tough one Shows the strength of people and the evil of others A must read"

A wonderful book! Writing is incredible and the story flows seamlessly. Character development is strong, and premise is interesting. Really enjoyed it.

greatly flawed, not only historically but scientifically as well...did not finish it ....not worth the money spent...sorry...

Really enjoyed it. Felt it was a little slow in the beginning, but once it got going it was well worth it.

Amazing story of Maerican slavery on a par with Uncle Tom"s Cabin. More realistic, less sentimental than the latter.

This should've been a mandatory read when I was in high school...

It had it's good parts, however it was similar to other slave/runaway books. I thought it would be much better especially being an Oprah's book club favorite. #book41of2019 #bookworm #whatsnext

Found it difficult to follow, back and forth and never really had a proper ending.

A tragic story of mans inhumanity to man which has taken centuries to change and sadly not yet completely remedied. Well written and very well narrated.

This book was compelling from the very beginning to the very end. Cora was such a strong character. I was shocked when I reach the end. I felt the story left me wanting more....but maybe that was the point.

I had a difficult time staying focused while listening to this book.

This was a great story that takes you back in time. It helps one understand the era a bit better. Narration was great too!

It was perfect as an audiobook - engaging storyline and the narrator kept the pace moving with expressive voice.

Compelling characters, story, historical context --much of which I did not know.

Great story, especially during these times. Really puts you back in slave time times, puts you in the shoes of a slave girl escaping the horrors of the south. Sometimes a bit confusing when the story takes an unexpected tangent. The reading is excellent, however.

Hard to follow in the beginning. Stuck it out, but it only got slightly better.

Hated it for many reasons.

It took me a little while to get into, but I really enjoyed this book overall.

Awesome and sobering at the same time. A look behind the mask of what we call America.

This title is due for release on August 2, 2016
We'll send you an email as soon as it is available!