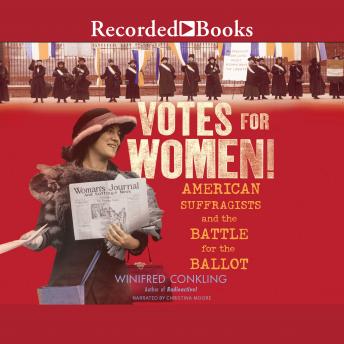 Votes for Women!: American Suffragists and the Battle for the Ballot

On August 18, 1920, American women finally won the right to vote. Ratification of the 19th Amendment was the culmination of an almost eighty-year fight in which some of the fiercest, most passionate women in history marched, protested, and sometimes broke the law in to achieve this huge leap toward equal rights. In this expansive yet personal volume, author Winifred Conkling covers not only the suffragists' achievements and politics but also the private journeys that fueled their passion and led them to become women's champions. From Susan B. Anthony and Elizabeth Cady Stanton, who founded the suffrage movement at the 1848 Seneca Falls convention; to Victoria Woodhull, the first female candidate for president; to Sojourner Truth and her famous speech, 'Ain't I a Woman?'; to Alice Paul, who was arrested and force-fed in prison, Conkling combines thorough research with page-turning storytelling to bring the battle for the right to vote to vivid life. Votes for Women! also explores the movement's often powerful, sometimes difficult relationship with the temperance and abolition movements, and takes unflinching look at some of the uglier moments in the fight for the women's vote. Votes for Women! is a mesmerizing read perfect for fans of propulsive narrative nonfiction stories like Most Dangerous and The Family Romanov. Author bio: Winifred Conkling is the award-winning author of fiction and nonfiction for young readers, including Radioactive!: How Irene Curie and Lise Meitner Revolutionized Science and Changed the World?, Passenger on the Pearl: The True Story of Emily Edmonson's Flight from Slavery and the middle-grade novel Sylvia and Aki, winner of the Jane Addams Children's Literature Award and the Tomas Rivera Award. She studied journalism at Northwestern University and received an MFA in writing for children and young adults from the Vermont College of Fine Arts.

This title is due for release on February 13, 2018
We'll send you an email as soon as it is available!