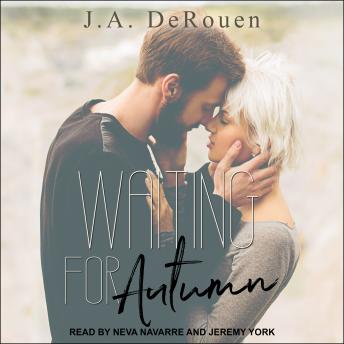 Sebastian Kelly believes he isn't worthy of redemption, of a chance to right his wrongs. But an unexpected trip home, the place he dreads most, calls in question everything he's come to believe. And who knows, he may find exactly what he's been waiting for.

Autumn Norris knew in an instant her life would never be the same. Years have flown by in a flurry of sparkles and dress up, and Autumn has refused to let the anchor of regret pull her under.

Until she lays eyes on Sebastian, and the wave of 'why,' 'where,' and 'how could you' flood her every thought.

Old hurt and new betrayal twist first love into a reluctant partnership, and theirs may be a bond even pigtails and butterfly kisses can't mend. But the past five years have felt like a lifetime, and Seb is willing to wait as long as it takes. Because the truth is, he's always been waiting for Autumn.

What a wonderful second chance love story from J.A. Derouen. Waiting for Autumn is the love story of Sebastian and Autumn. Their story and their angst and love and heartbreak make for a beautiful story narrated by two wonderful narrators. I loved listening to this book so much I did not want to leave their world and I hope we will get another book or two from the other characters.

This title is due for release on March 29, 2019
We'll send you an email as soon as it is available!