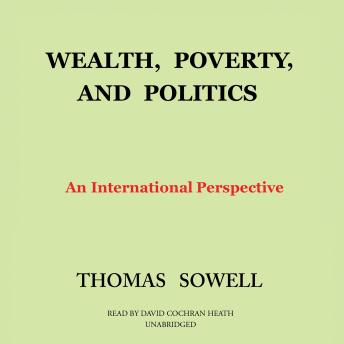 In Wealth, Poverty, and Politics, Thomas Sowell, one of the foremost conservative public intellectuals in the country, argues that political and ideological struggles have led to dangerous confusion about income inequality in America. Pundits and politically motivated economists trumpet ambiguous statistics and sensational theories while ignoring the true determinant of income inequality: the production of wealth. We cannot properly understand inequality if we focus exclusively on the distribution of wealth and ignore wealth production factors such as geography, demography, and culture.

Sowell contends that liberals have a particular interest in misreading the data and chastises them for using income inequality as an argument for the welfare state. Refuting Thomas Piketty, Paul Krugman, and others, Sowell draws on empirical data to show that the inequality is not nearly as extreme or sensational as we have been led to believe.

Transcending partisanship through a careful examination of data, Wealth, Poverty, and Politics reveals the truth about the most explosive political issue of our time.

Sowell is brilliant. This should be required reading on every college campus across America. Narration is crisp and concise but slightly robotic.

Have you ever looked a given issue and wondered aloud as to why the issue at hand doesn't make sense of its conclusion? If that's you, please read this book. I have wondered about the question of wealth distribution for a long time and was infinitely relieved to hear Sowell's take on the facts. This book helped my preconceived notion of wealth "distribution" and rightfully focused it on wealth "transference," (a concept that he talks about early on it the book). Armed with proper knowledge of the subject, I'm already thinking outside the box on how best to approach this issue with others and by so doing help change perspectives. Great book! One which college campuses should rightfully consider for their curriculum. Thank you, Thomas Sowell! You've helped set this prisoner free.

Great book, but the narration lacks character. His voice is just a tad robotic. This doesn't really affect the enjoyment of the content, though.

This title is due for release on September 8, 2015
We'll send you an email as soon as it is available!