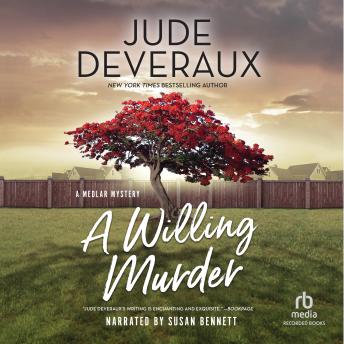 New York Times bestselling romance author Jude Deveraux makes her debut in the world of mystery with a story of old secrets, deadly grudges and an improbable group of friends who are determined to uncover the truth regardless of the consequences. Sara Medlar is a household name in romance, with millions of books sold. But lately, retirement has been boring her and she's found herself back in her hometown of Lachlan, Florida, remodeling the grand old mansion she'd admired as a child. It's much too big for her alone, but she'd die before letting anyone in town know that. Then Sara's niece Kate is offered a job in Lachlan-a start in what could be a very successful career in real estate. She accepts immediately, but with so little saved up, she'll have to approach her estranged yet incredibly famous aunt for a place to stay while she gets herself settled. But when she arrives at Sara's home, she finds she's not the only long-term houseguest. Jackson Wyatt already has his own room, and though it's impossible to deny his good looks and charm-he's clearly got her aunt wrapped around his finger-she's also never met anyone who irritates her quite like Jack does. However, when two skeletons are accidentally uncovered in the quiet town, this unlikely trio is suddenly thrust together by a common goal: to solve a mystery everyone else seems eager to keep under wraps. United by a sense of justice and the desire to right old wrongs, Sara, Kate and Jack will have to dig into Lachlan's murky past to unravel the small town's dark secrets and work to bring the awful truth to light.

I love this book, first time reading Jude Devereaux; so glad I found this author. The characters were so likable, all of them, especially Aunt Sara; Jack and Kate. They were fabulous. I like how she went back in time and had real conversations while reminiscing. I like the way the sheriff was at first and then how he came around. Great Read, will read another one for sure. I highly recommend.

I was glad there were upbeat characters rather than the loner who has to fight everyone, but is brillant and right.

Fun to the end. Excellent reader! Wonderful repartee between characters in the story. An overall superior "listen."

Great book. Loved how Susan Bennet made the characters come to life.

I enjoyed the story, but the ending was predictable.

This was a very enjoyable book. The narrator was good and the story kept me interested.

Too long and not relatable. Prefer JDs period romances... tbh.

Couldn't put it down. An extremely well-written story that kept my attention throughout. The narrator did an excellent job of adding another dimension to the engaging and well-defined characters. As for the killer, not once did I guess correctly. But once I knew it made complete sense. What a wonderful book. I highly recommend it. Now, I'm going to go check and see if there are any more books written in this world. I'd love to see more about the characters.

An enjoyable story with wonderful narration.

I really enjoyed this one. Lots of twists! Good characters and good story-telling.

I really enjoyed it! The characters’ personalities are well developed, and the narrator really brings them to life.

Very good book. Agree with several of other reviews. The connection and reaction between the 3 main characters was surreal. Narrator did a good job Definitely has an unusual ending.

I liked the story and the narrator. I liked the characters. It held my attention throughout. Some plot twists I saw coming, but not all.

Wow, I loved every bit of this book. the ending was amazing.

I enjoyed this book. I wanted the storyline to continue.

I really liked the fact that this was narrated by the author and loved her voice. I got drawn in right away with the character development and plot. It felt like I was on an adventure with Sarah, Jack and Kate. Even though I thought I had it figured out, there was a plot twist I didn't see coming. I thoroughly enjoyed this book and would highly recommend it.

I really enjoyed this book. It was a great listen, easy to follow with good characters and flow. Kept my attention throughout.

I am in LOVE with Jack! This is a great mix of romance and murder mystery. It made me smile listening to their interactions. I am definitely listening to the rest of this series.

I enjoyed both the story and the narrator

Jude Devereaux always comes through. i was glued! Very entertaining and the characters likeable. She always makes people seem so real - not over done or ridiculous as some writers do. I recommend.

This title is due for release on September 18, 2018
We'll send you an email as soon as it is available!