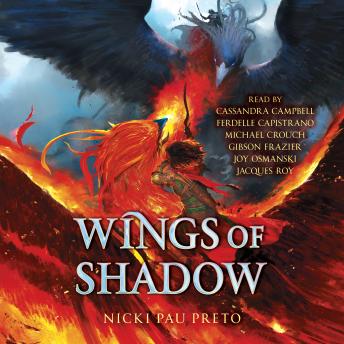 #3 of Crown of Feathers

In the heart-stopping finale to the Crown of Feathers trilogy, which #1 New York Times bestselling author Kendare Blake calls “absolutely unforgettable,” Veronyka must face her most devastating enemy yet: her own sister.

I had a sister, once…

​Veronyka is no longer an orphaned stable boy or a nameless Phoenix Rider apprentice: she is the daughter of Pheronia Ashfire, the last queen of the Golden Empire…and the niece of Avalkyra Ashfire, the resurrected rebel queen who tore the empire apart.

Now that the secret is out, everyone at the Eyrie treats Veronyka differently, and with Tristan still a hostage of the scheming Lord Rolan—and Sev with him as a spy—Veronyka feels very much alone. Except for her beloved phoenix, Xephyra, of course, and her new friend, Kade, who has his own reasons for wanting to save Tristan.

Was it always going to come down to this? Sister against sister? Darkness against light?

Veronyka is determined to do whatever it takes to get Tristan back, even if that means revealing her identity to the world and inheriting a throne she’s not sure she wants. But when she discovers that Avalkyra has bonded with a strix—a legendary creature of darkness that feeds off the life force of others—Veronyka realizes she has more to deal with than an encroaching war with the empire. Val is willing to destroy everything to get her revenge on a world that rejected her, and if Veronyka wants to bring peace to the empire and Pyra alike, she must face down her sister once and for all.

The world began with Ashfire queens…perhaps they will also be its destruction.

This title is due for release on July 13, 2021
We'll send you an email as soon as it is available!