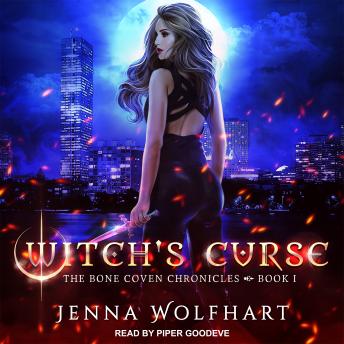 Ever since my parents died in the demon war, I've paid my way through life by using magic to con people. It's not right, but a girl's gotta do what she can to survive.

Unfortunately, my latest con has left me smack dab in the middle of a murder scene. Now, a coven of angry mages thinks I'm the killer. In order to clear my name, I have to team up with an infuriatingly sexy warlock whose powers are far darker than he admits. Throw in a string of related murders and a vexed vampire clan, and I'm up to my eyeballs in danger.

But that's not even the worst of it. When I get too close to the real killer, he casts a life-threatening curse on my grandmother. Before, I just wanted to save my own butt, but now I'll do whatever it takes to track him down-even if it means following him through monstrous dimensions.

Because I don't play nice with magic. And when you mess with Grandma, you become #1 on my shit list.

The narrator did an excellent job, and the book kept my attention the entire time. There were a few parts of the plot that weren’t fully explained but overall the book was very good.

This was a free book, that was the best part. Slow book going nowhere then it was over. Narrator made whole book sound like blah blah blah.

the story is ok but the heroine is tiring. so I will just delete the whole serie.

this book is great

Took a while for me to get into it. Then the ending...well it ended way too soon and was abrupt really. In all it didn't grab me quick enough and when it did it rushed the ending

This would have been so much better if the lead character didn't spend the entire series second guessing herself and explaining her emotions. I have never eye rolled or said out loud 'No s**t Sherlock'. It was free though

I had trouble finishing the book because I didn't like the MC, the only reason I did finish it was it was the only book I had. She was whiney, arrogant and a know it all. I will not read any more of this series and wish I hadn't wasted money on this book.

it was ok but wouldn't listen again

I enjoyed it more than I thought I would. Good story

This book had a tendency to reiterate the storyline over and over. It was ok, but most of the book was the main person debating what to do with herself over and over in her mind. It really got annoying. I'm the kind of person who reads/listens to all the books in a series but I won't be with this one because it would be a waste of my money.

it was a good book. liked the narrator!

Not a bad story to pass the time with. A little predictable and the story seemed to go around in circles without moving passed certain points. Narrator was pretty good.

Over all, definitely worth a listen.

I really dislike the authors use of the word warlock. To write a book about witches one should do enough research to know that a male witch is also called a witch, while the term warlock is used for a witch who had been kicked out of a coven.

This title is due for release on November 28, 2017
We'll send you an email as soon as it is available!