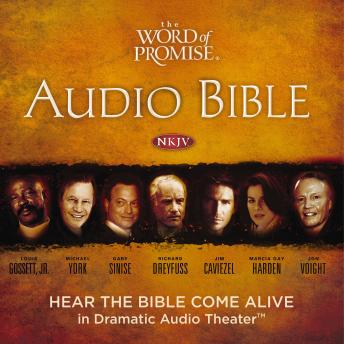 With an original music score by composer Stefano Mainetti (Abba Pater), feature-film quality sound effects, and compelling narration by Michael York and the work of over 500 actors, the The Word of Promise Audio Bible will immerse listeners in the dramatic reality of the scriptures as never before.

AMAZING!!!!! How can anything from the Bible be anything less!

Outstanding audio Bible!! The narrators did a splendid job bringing the Gospel to life. God is good all the time and mercy endures forever. He deserves the best and nothing but the best. Great job!!! You will not be disappointed. It's like I'm there.

Wow, the actors who read this recording are -- in a word --FANTASTIC. These voices are to the joy of hearing God's word. You will love this version of the audio Bible!

Classic read in all of its forms

This is an amazing book the only problem is you don’t know the track list so it makes it hard to find any book or chapter. Does anyone have that list with a description of each?

This title is due for release on December 1, 2008
We'll send you an email as soon as it is available!