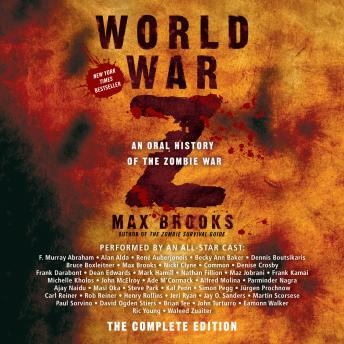 World War Z: The Complete Edition: An Oral History of the Zombie War

World War Z: The Complete Edition (Movie Tie-in Edition): An Oral History of the Zombie War is a new version of Max Brooks' episodic zombie novel. The abridged versions of the original stories are now joined with new, unabridged recordings of the episodes that were not included in the original (abridged) version of the audiobook. These additional episodes feature a star-studded cast of narrators to coincide with the upcoming release of the film.

In this new classic of apocalyptic fiction that feels all too real, the Zombie War came unthinkably close to eradicating humanity. The documentary-style oral history records the testimony of men, women, and sometimes children who came face-to-face with the living, or at least the undead, hell of that dreadful time.

I dunno. It's an interesting listen from a apocalypse stand point. And it's easy fare to split over short road trips. And the cast of voices is very good -- sounds more like a radio play. Except that Mr Brooks I think could have done better by casting a professional narrator instead of himself. But bottom line -- it just wasn't scary. Now if the movie had in any shape or form followed the book at all, that coulda been scary.

absolutely fantastic. some of the best 12 hours of audio book I've heard.

I haven't read the paper copy, but this was so entertaining! And such a star studded cast. It's a really interesting story and done in such a way that you really feel like it happened. Don't go into it thinking it's going to be like the movie though. The movie uses some of the ideas from the book, but otherwise isn't much like the book at all.

This is a fantastic audiobook. It is a very engrossing fully entertaining. The varied cast really brings the concept of the novel to life. The movie is NOT the same as the book, consider them two different things.

Was ok. Well written, I definitely prefer the format of a single tale or two. Stories interweaved some. Read was very political and military focused. More everyday stories would have improved it, as would more female voices, that seem to be added as an afterthought.

While I wouldn't consider it a masterpiece, it's a book I keep returning to with the same enthusiasm over and over again.

The cast is amazing, this feels more like a play than audiobook.

Narration was great the story just sorta fell flat for me. It just doesnt feel like it went anywhere really.

Love this book. The cast really bring it to life.

love this book, tho some of the narrators I find hard to understand at times.

Absolutely love the book and there is a full cast for the book. I recommend this to anyone looking for a good sci-fi listen (or read).

This book was awesome. I really liked it. Narration was fantastic.

Great listen, and the narrators really made the book!

Great book! Well read and star studded. I finished it in less than a week and I have a one year old. Wonderful story in classic Max Brooks style. What's not to like... zombie apocalypse story with great writing and good reading. This is my first experience with audio books and I'm totally hooked!

Some of the actors were to obviously actors. Professional readers should be doing this not actors.

This audio book is very thorough in details. I wish they could make this into a tv show series. The movie has nothing relating to this great book. I recommend this greatly.

Great listen, especially the multiple narrators for all the different characters

This book was amazing! The style of interviews and the slow unfolding of the plot kept me riveted. Best fiction book I've heard in a long time.

Great book! I love zombie books so maybe I'm biased but I def recommend it!

The fact they got so many people to narrate this is just fantastic! It really brings the book to life, since it's a series of many people's accounts of their experiences. It makes it that much more believable with all these different voices telling the story. I am just thrilled with how well done it was. Definitely recommend this book for any zombie story fan, as this is a really accurate depiction of what a zombie outbreak would actually be like from a military, and civilian stand point, from all over the world. All different walks of life, in many different situations. This is one of my favorite books, and audiobooks did a great job bringing it to life.

This is so amazing at tell the stories in a believable way. Feel like I live there I would not be surprised if thought this really happen amazing book

Amazing story and truly answers all the questions "what if..."

This title is due for release on May 14, 2013
We'll send you an email as soon as it is available!