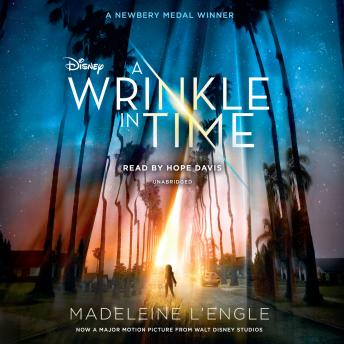 A Wrinkle in Time

Meg Murray, her little brother Charles Wallace, and their mother are having a midnight snack on a dark and stormy night when an unearthly stranger appears at their door. He claims to have been blown off course, and goes on to tell them that there is such a thing as a 'tesseract,' which, if you didn't know, is a wrinkle in time. Meg's father had been experimenting with time-travel when he suddenly disappeared. Will Meg, Charles Wallace, and their friend Calvin outwit the forces of evil as they search through space for their father?

In 1962, Madeleine L’Engle debuted her novel A Wrinkle in Time, which would go on to win the 1963 Newbery Medal. Bridging science and fantasy, darkness and light, fear and friendship, the story became a classic of children’s literature and is beloved around the world.

A Wrinkle in Time is the first book in The Time Quintet, which consists of A Wrinkle in Time, A Wind in the Door, A Swiftly Tilting Planet, Many Waters, and An Acceptable Time.

© 2007 by Taeeun Yoo. Used with permission of Pippin Properties, Inc.

Wonderful, powerful story! I enjoyed it very much. The narrator is very talented!

Great listen with the kids on the way to school. It takes the kids and I 30 minutes to get to school. I could not get them to settle down. This book and narration did that.

Thoroughly enjoyed the story. The narrator was immensely animated.

Loving listening to this magical book!! It’s keeping my kids thoroughly engaged. And me too.

I liked this one.

Great narration of the book. My Son recommends everyone should read it.

This is a book for young adults. If you're not a 13 year old girl don't waste your time.

I love this book but not reading! This helped me so much. Now I can see the movie. Thanks Audiobooks!

The narrator keeps you engaged! Love it

amazing! loved all the voices and dramatization! not overdone, just perfect

It was an okay listen

a whimsical tale! Was very impressed with the narration.

Narrator's different character voices were extremely annoying. I had to stop listening. i will buy the book instead.

A wonderful adventure with a narrator who helped make it even more real. ;)

Can’t wait to see the movie.

I read this many years ago as a child. It was wonderful then. The story is great for children, if potentially a little frightening. I think I would still have enjoyed it if the narrator had been better. I have never given a narrator a bad review, as I can only imagine how difficult it would be to bring a book to life, but this one almost made me stop listening. She was stilted and her voices for other characters almost comical. The classic story stays true - I just wish someone else had read it.

This is amazing i love it its like bum bum bow

It was OK. But I think I got annoyed with the protagonist towards the end of the story. So it spoiled most of the story for me sadly.

Great book, I liked it because it’s different than most books I’ve read. Would recommend to friends.

We all loved the book. Our family ranges from 5 to 56 years. The voices were really well done, keeping the attention of the kids, and the story was wonderful.

Takes you far away. My boys loved it!

I liked this book because it really is a book that children and adults will both like.

I thought the story was drawn out and a little dry.

it was the best book ever

Seemed all over the place. Took longer to describe insignificant parts of the story than it did to transition through massive plot points. Was not impressed with the book feeling like it was speeding through a simple content.

I found the book to be very good and the narrator told the story in a way you can visualize what was going on. I hope the movie is just as good as the audiobook was.

A lovely book for children and adults. Narration was exceptional.

The narrator was good kept me interested to continue listening. It’s a great read. It also helps that the narrator spoke in different languages

The book isn’t bad and considering when it came out it was probably revolutionary for its time, however I found it to be boring and not that creative listening to it as an adult.

The story was good but the weird slow soft character voices were a little annoying.

I never read this as a child, nor as a mother, so it was "all new to me" & it was a delightful escape from today's world!

Loved this book as a child, and still find it entertaining and thought provoking. However, I found the narrator's voice extremely grating. Her narration of the general text was fine, but in my opinion all the character voices she used were very annoying. It's all subjective of course, but she used a lot of voice cracks, especially for the main three children. I also didn't think that her choices matched the text. For example the text would be "Meg yelled" and she would not *yell* the line even in just energy. She also used random accents for some characters, which I didn't find suitable. I was very disappointed, and would have stopped listening if I'd not already used my credit.

I have loved this book since I was a kid. Still love it!

ok read i enjoyed it.

A real adventure from start to finish. Beautifully written and beautifully narrated, didn’t want this book to end.

I couldn't get into it just not my thing

Amazing. The narrators embodied each characters’ personality perfectly. Nothing felt forced, the story seamlessly flowing through their narration.

better than the movie

This title is due for release on January 10, 2012
We'll send you an email as soon as it is available!