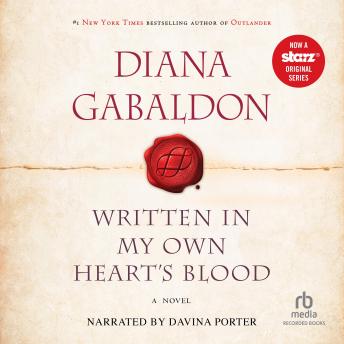 Written In My Own Heart's Blood

Hurtled back through time more than two hundred years to 1743 Scotland, Claire Randall finds herself caught in the midst of an unfamiliar world torn apart by violence, pestilence, and revolution and haunted by her growing feelings for a young soldier, James Fraser.

Love this series, a little heavy on the extra details but still a great read. Can’t wait for the next one.

Once again Davina does a glorious job narrativing, but I think even she is feeling long winded at this point. I just wish DG had enough faith in the reader memory to not rehash everything that's happened throughout the books every single time she changes from one character to the next. Why hasn't her editor reined her in on this? If she stopped this tedious practice of constantly retelling every characters back story (even if it was just told a few chapters prior!) she could easily shave 500 pages from each book and 25 hours off each audiobook! I'll be honest, I keep going because I want to know how Jamie is, but the near constant calamity that befalls him and Claire is laughable at times. So is the strange ability that has people randomly cross paths all the time. With the frequency that the main characters "just happen" to find themselves bumping into prominent historical figures or evil doers is dizzying. Not to mention, how the main character always escapes death and disease. It would be nice to actually see how Jamie and Claire handle normal boring day to day business of marriage for any amount of time that would find regular mortals dealing more with relationship issues than constant threat of the Red Coats. I'm also constantly annoyed, this many books later that even if Brea is a grown woman she (just like her mother) still doesn't get that even if she hates it, assuming a more demure role in public would save Roger (and Jamie) A LOT of troubles. These women seem much more like women in this day an age than of their mid century time. All of these things make me run my hands over my face and down the bridge of my nose while making a low Scottish noise in the back of my throat. And stop with the disgusting details of sores and creatures people of the 1700s have growing or crawling out of them. It never fails that I reach for a snack while reading or listening and then DG decides she's going to give a lesson on the anatomy of some ailment of some non-character just to flex her medical muscles for several pages. Claire is a genius, we get it.

Can’t wait for the 9th and 10th book. So happy to see more to come. I was elated and crying when I knew Brianna was back and can’t wait to venture on with more of their escapades. I can’t get enough of this story. Even going to Scotland this year! Love the narrator. I will listen to anything she narrates.

excellent story. I feel the narration could be more varied between characters.

I’ve gone through all the books & I love them but this one bothered me quite a bit. Claire & Jamie are very unlikeable in this book, especially for the first 2/3 of it. They are very much into themselves & each other that their actions are extremely selfish & not very nice. And, I was so excited to finally hear more about William but he comes off as an extremely spoiled brat that doesn’t know how to deal with disappointments well without being an ass. Honestly, I guess no character can be good all the time & that would make for a boring story but the best characters in this book was everyone who wasn’t a main one. And, I’ve never known anyone to randomly run into a family member or friend while crossing hundreds of miles in the wilderness, much less do it quite as often as these folks do.

I is a fantastic book and I love the way she reads it.

Love love this whole series Have read every book by this wonderful Lady. She never disappoints

I could listen to Davina Porter read the phone book. I still love the series, but the author has a few too many story lines going on for my liking. This being said, I can not wait for book 9.

I love the series Outlander Diana Gabaldon. I have renewed myself with her novels.

One of the best books I’ve read in awhile.

Good listen just like all of her other books

I kept waiting for the time traveler storyline to pick back up with details. Disappointed it really did not. Then a very abrupt ending. I struggle through at times because of so many repetitive details. It doesn’t stop me from reading the next book though! I do love the characters and storyline.

My second favorite book in the outlander series. Loved it!

I love the Outlander books. Davina does a great job narrating.

Diana Gabaldon is an amazing writer. She brings each character to life so richly that you truly feel like you know them and you fall in love or hate them. Her story lines are complex, filled with historical context and quite compelling. Once you begin reading, you do not want to stop. Once you are finished, you want more! Not just your average historical romance novelist. Love her and the narrator!

One of my favorite books of the series. Good read.

I love this series and the Narrator! Cannot wait for books 9 and 10. In the meantime I plan on enjoying the "spin off" books of the John Gray series and the " in between" volumes 1 and 2.

Of course what is there to say, except I know there is to be one more book of this wonderful series, OUTLANDER. I love reading Diana's, books but having them read back to me by a great narrator,Sabin a, another rare treat.

LOVED every minute of this and the others. Very sad that there’s no more.

i love these books and the narrator is amazing

I love this series! A must read/listen.

Narrator was great, book was amazing

It gets your attention and holds it through the whole book, and at the end you are ready to start the next one.....

Absolutely the best! I have enjoyed this series so much. More lease!!

Davina Porter is the most fabulous narrator on the planet. I'm spoiled now after listening to her. I absolutely love the Outlander series. I'm sad that I've read that last book.

No word just love the whole series can't wait til the 9th book comes out and to see the 3rd season come to life but if you don't like any of these books you crazy!

I was sad when this book series was finished. I loved all the characters and their adventures.

Great book. I just love this series and the story it told. Davina Porter was fabulous and brings all the characters to life. I can't wait for the next book.

I love this series. Anxiously looking forward to book 9. Now listening to the John Grey series.

Amazing. Love this series. Hard to listen to anyone else after Davina Porter and the love she gives each character.

I have enjoyed yet another book of Diana Gabaldon! She has held me captivated throughout the entire series. I feel like I know each character personally. I look forward to a new one!! Please don't stop!! Never boring and she has such a colorful vocabulary. Great book!!

If I die before the next book comes out, at least I'll die happy!

This title is due for release on June 10, 2014
We'll send you an email as soon as it is available!