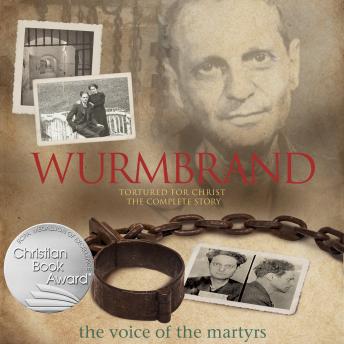 The Voice Of The Martyrs

On February 29, 1948, Richard Wurmbrand was arrested by the secret police. His crimes? Leading Christian worship and witnessing—both of which were illegal under the atheistic Communist regime of Romania.

Richard spent fourteen years in prison. He was tortured, beaten, and locked into a  solitary confinement cell. Sabina Wurmbrand spent three years in a labor camp,nearly freezing to death as she and other prisoners worked on the Danube Canal. She was repeatedly told her husband had died behind bars.

But Richard and Sabina Wurmbrand had an unshakeable faith in Christ. Neither of them gave up hope, and neither of them would stop talking about Jesus.

Now, for the first time, both sides of this amazing story are told in one book. Wurmbrand tells of Richard and Sabina Wurmbrand, combining stories and research from the following books: The Pastor’s Wife, In God’s Underground, and Tortured for Christ. Your faith will be inspired as you go deep inside the darkest prison cells to see how the light of Christ continues to shine from the hearts of those totally committed to Him.

The story is true so I needed to know it, but boy, is it hard to listen to and hang in there for the whole thing! I guess it shows how far my heart is from giving my all for Jesus because I don't have any where near the attitude toward suffering the Wurmbrands' did. Even as a little girl I would ask God why he made us with the ability to feel pain if people could torture people....so torture has always been a very sensitive issue for me. For years I have supported Voice of the Martyr to help persecuted Christians and yet I never wanted to read this book because of the cover picture of the original book (tortured hands in shackles) but this cover is softer and I guess it caused me to forget just how hard it was going to be to hear about torture. I am glad I know the Wurmbrand's story now, but I will be honest, I got mad at the book about the point where he tells about how the prison guards, on top of all kinds of physical torture, made him eat dung that another prisoner was forced to eat and then threw it up and then Richard had to eat that. It was too much for me to process and I went into denial that this was made up. But after about a week I began to listen to the rest of the story and finished it and I believe it is all true. It is long and very hard to endure (you just keep hoping they will be released or treated better but they don't for a long long time), but the story does make the reader realize how much we should be grateful for how good our lives are (if we are not living in a Communist country) and that we have to pray and help those who are in prison in Communist countries because it's just as terrible for them as the Wurmbrand's had it, I'm sure.

It was a testament to their faith. They endured many atrocities and lived to tell about it. Remaining faithful to the Lord Jesus

This title is due for release on August 15, 2019
We'll send you an email as soon as it is available!