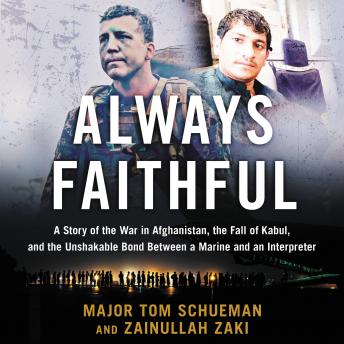 Always Faithful: A Story of the War in Afghanistan, the Fall of Kabul, and the Unshakable Bond Between a Marine and an Interpreter

Band of Brothers meets Argo in this dramatic and heartfelt dual memoir of the war in Afghanistan told by two men from opposite worlds. Always Faithful entwines the stories of Marine Major Tom Schueman, and his friend and Afghan interpreter, Zainullah “Zak” Zaki, as they describe their parallel lives, converging paths, and unbreakable bond in the face of overwhelming danger, culminating in Zak and his family’s harrowing escape from Kabul.


In August of 2021, just days shy of the 20th anniversary of 9/11, America ended its longest war. The speed of the Afghanistan’s fall was so stunning that thousands of Afghan citizens who had helped American forces over the course of two decades—and had been promised visas in return—were suddenly stranded, in extreme, imminent danger. As the world watched the shocking scenes of desperation at the Kabul airport in the final two weeks of August, Maj. Tom Schueman fought—both behind the scenes and through a social media campaign—to get his friend and former Afghan interpreter, Zak, out of Afghanistan before he and his family were discovered by the Taliban. When Zak and his family finally took off from the airport mere days before the US left the country, the years-long effort to get Zak to America culminated in two simple words on Instagram: “Wheels up.”

Now in Always Faithful, Tom and Zak tell the full story of the divergent paths that led them to Afghanistan, the dangerous road they walked together in service to America, and how their commitment to each other ended up saving them both. Brilliantly told in Tom’s and Zak’s alternating first person voices, Always Faithful tracks the parallel lives of these two men who each spent their childhoods in fear, peril, and poverty, and turned to war in attempt to build a meaningful future. On an inevitable course towards each other, their lives dovetail in Afghanistan’s deadly Helmand Valley, where they formed a brotherhood that transcends even the most overwhelming of odds, eventually culminating in Zak’s harrowing, eleventh-hour rescue.

The end result is an intensely personal and uniquely ground-level account of Tom and Zak’s experience, Always Faithful gives readers a 360-degree view of the war. At once provocative and heart pounding, their stories together form a microcosm of the complicated and lasting effects of America’s longest war. Through their eyes and their experiences, they challenge readers to explore the legacy of the war for American and Afghan citizens alike, as we all collectively seek to understand whether twenty years of war was worth the price.

This book should be required reading for all Americans! I could not put it down and I ended the book even more grateful for the country in which I live and the freedoms I enjoy

This title is due for release on August 9, 2022
We'll send you an email as soon as it is available!