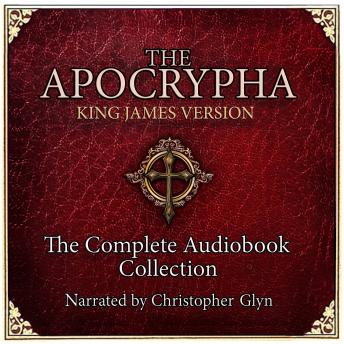 In Biblical terms, ‘Apocrypha’ is a much-misunderstood term – and the title belies the immense significance of the 14 books to which it refers, all of which were originally published in the 1611 King James Bible but removed in 1885. Most of those books have always been in the Roman Catholic, Greek and other Orthodox Bibles and therefore are accepted as true Scripture by the majority of Christians. So, although the word ‘apocrypha’ literally means ‘things hidden away’, these texts have never ‘officially’ been considered secret.

Perhaps the best description is Martin Luther’s:‘Apocrypha – that is, books which are not regarded as equal to the holy Scriptures, and yet are profitable and good to read.’

In any event, these books are certainly not as well-known and understood as the canonical Scriptures – and who better to bring to light and new life these lesser-heard sacred texts than acclaimed British narrator Christopher Glyn! Best-known for his narration of the hugely popular Complete King James Audio Bible among many other inspirational works, Christopher is the only narrator to have recorded both the Bible and The Apocrypha. Drawing on a thirty-five-year career as a Christian broadcaster and narrator, he delivers these stories in a uniquely expressive style that is filled with wonder at the beauty and power of God’s Word, yet which is clear, natural and easy to understand.

• The romantic tales of Tobit and Judith

• The Wisdom books of Ecclesiasticus, Wisdom of Solomon, Baruch, The Epistle of Jeremy and The Prayer of Manasses

• The important Apocalyptic book of 2 Esdras

• Plus additions to the canonical books of Ezra, Esther and Daniel.

The "Apocrypha", meaning "Hidden Away", is a collection of 18 book written roughly over the course off 800 years (400 BC - 400 AD) sometimes referred to as "The Silent Years" or the time period between the Old and the New Testements. Withdrawn from common use these bools were regarded as containing mystererious or esoteric lore too profound to be communicated to any save the initiated. In short I would consider most of the Apocrypha to be more of a historically focused book of faith whereas the Biblical scriptures are more of a faith focused book of history. I see the Apocrypha's importance in a generalized quote from Luther which states " These are books that, though not esteemed like the Holy Scriptures, are still both useful and good to read. "

This title is due for release on January 1, 2018
We'll send you an email as soon as it is available!