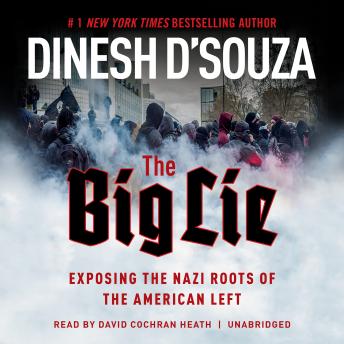 The Big Lie: Exposing the Nazi Roots of the American Left

What is “the big lie” of the Democratic Party? That conservatives—and President Donald Trump in particular—are fascists. Nazis, even. In a typical comment, MSNBC host Rachel Maddow says the Trump era is reminiscent of “what it was like when Hitler first became chancellor.”

But in fact, this audacious lie is a complete inversion of the truth. Yes, there is a fascist threat in America—but that threat is from the Left and the Democratic Party. The Democratic Left has an ideology virtually identical with fascism and routinely borrows tactics of intimidation and political terror from the Nazi Brownshirts.

To cover up their insidious fascist agenda, Democrats loudly accuse President Trump and other Republicans of being Nazis—an obvious lie, considering the GOP has been fighting the Democrats over slavery, genocide, racism, and fascism from the beginning.

Now, finally, Dinesh D’Souza explodes the Left’s big lie. He expertly exonerates President Trump and his supporters, then uncovers the Democratic Left’s long, cozy relationship with Nazism: how the racist and genocidal acts of early Democrats inspired Adolf Hitler’s campaign of death; how fascist philosophers influenced the great twentieth-century lions of the American Left; and how today’s anti–free speech, anti-capitalist, anti–religious liberty, pro-violence Democratic Party is a frightening simulacrum of the Nazi Party.

Hitler coined the term “the big lie” to describe a lie that “the great masses of the people” will fall for precisely because of how bold and monstrous the lie is. In The Big Lie, D’Souza shows that the Democratic Left’s orchestrated campaign to paint President Trump and conservatives as Nazis to cover up its own fascism is, in fact, the biggest lie of all.

I would suggest this for all students entering college. It has explained why I had such issue with my history prof in 1985.

Sets the historical record straight. I always wondered why national socialists and fascists were considered right wing when they were socialists.

Dinesh is absolutely amazing!! He's one off my heroes.

Great book!! I love how the author backs it with facts and not just hate for the other side. I ageee that this book should be listened to before going off to college. In fact maybe in high school too! Please tell your friends and those that believe the lies to just take a listen and then have a civil conversation with a respectful debate. Now there is an idea ????. I thought the narrator did an excellent job with reading just how the author is when I have heard him speak. Very respectful and not load and hateful if you don’t agree with his point of view. WELL DONE ???? GUYS!!!

Explains it all, from a historical standpoint. However, I still just can't understand why some would have it so that the state controls everything. Can't wrap my head around that one but the author is great and so is the narrator.

This title is due for release on July 31, 2017
We'll send you an email as soon as it is available!