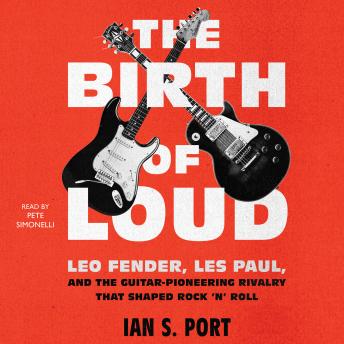 “A hot-rod joy ride through mid-20th-century American history” (The New York Times Book Review), this one-of-a-kind narrative masterfully recreates the rivalry between the two men who innovated the electric guitar’s amplified sound—Leo Fender and Les Paul—and their intense competition to convince rock stars like the Beatles, Jimi Hendrix, and Eric Clapton to play the instruments they built.

In the years after World War II, music was evolving from big-band jazz into rock ’n’ roll—and these louder styles demanded revolutionary instruments. When Leo Fender’s tiny firm marketed the first solid-body electric guitar, the Esquire, musicians immediately saw its appeal. Not to be out-maneuvered, Gibson, the largest guitar manufacturer, raced to build a competitive product. The company designed an “axe” that would make Fender’s Esquire look cheap and convinced Les Paul—whose endorsement Leo Fender had sought—to put his name on it. Thus was born the guitar world’s most heated rivalry: Gibson versus Fender, Les versus Leo.

While Fender was a quiet, half-blind, self-taught radio repairman, Paul was a brilliant but headstrong pop star and guitarist who spent years toying with new musical technologies. Their contest turned into an arms race as the most inventive musicians of the 1950s and 1960s—including bluesman Muddy Waters, rocker Buddy Holly, the Beatles, Bob Dylan, and Eric Clapton—adopted one maker’s guitar or another. By 1969 it was clear that these new electric instruments had launched music into a radical new age, empowering artists with a vibrancy and volume never before attainable.

If you are a guitar fan, or a fan of classic rock, this book has a lot to offer. It is extremely well-written and researched, and goes into a ton of detail about Leo Fender and Les Paul, as well as Rickenbacker and Bigsby in the creation of the solid body electric guitar, without ever being tedious or boring. Plus, they give props to Buddy Holly, Dick Dale, Eric Clapton, Mike Bloomfield, Jimmy Page, Jimi Hendrix and a host of other important musicians. Highly recommended to any music fan.

This title is due for release on January 15, 2019
We'll send you an email as soon as it is available!