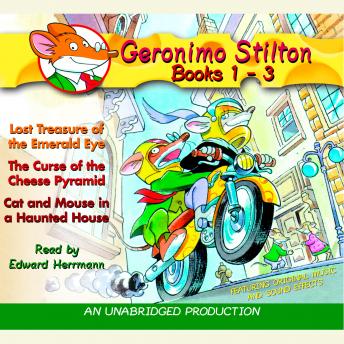 Geronimo Stilton: Books 1-3: #1: Lost Treasure of the Emerald Eye; #2: The Curse of the Cheese Pyramid; #3: Cat and Mouse in a Haunted House

Originally released in Italy, the Geronimo Stilton books have been translated into 35 languages, and the rights have been sold in over 175 countries. In less than three years, the books have become the most popular children's books in Italy, with over 1.6 million copies in print.

Book #1 - Lost Treasure of the Emerald Eye
It all started when my sister, Thea, discovered an old, mysterious map . . .

Book #3 - Cat and Mouse in a Haunted House
Lost in a dark, spooky forest, I quickly discovered that it was haunted--by cats! And in this case, curiosity almost killed the mouse . . .

Amazingness, Geronimo does it again, Would Recommend to anyone and everyone of all ages.

This title is due for release on October 12, 2004
We'll send you an email as soon as it is available!