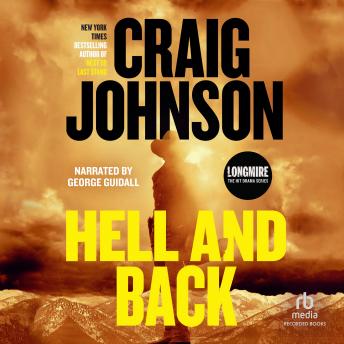 In Hell and Back, the eighteenth installment of the Longmire series, author Craig Johnson takes the beloved sheriff to the very limits of his sanity to do battle with the most dangerous adversary he's ever faced—himself

What if you woke up lying in the middle of the street in the infamous town of Fort Pratt, Montana, where thirty young Native boys perished in a tragic 1896 boarding school fire? What if every person you encountered in that endless night was dead? What if you were
covered in blood and missing a bullet from the gun holstered on your hip? What if there was something out there in the yellowed skies—along with the deceased and the smell of ash and dust—something the Northern Cheyenne refer to as the Éveohtsé-heómese, the
Wandering Without, the Stealer of Souls? What if the only way you know who you are is because your name is printed in the leather sweatband of your cowboy hat, and what if it says Walt Longmire—but you don’t remember him?

I've been reading (listening, as it were) to the Walt Longmire novels a long time now and I very much enjoyed this one. I really like the difference in this one, a little supernatural, going into the mythology of some of the Native peoples and adding in the true story of what happened at Fort Pratt as part of the story (also a bit of an interlude/palette cleanser kind of feeling). I'm a huge fan of Stephen King, so I really didn't mind the supernatural element and really enjoyed it. As always, very well written by Craig Johnson and well read by George Guidall.

Lol love Walt Longmire lol I thought it was a super natural book loved it!