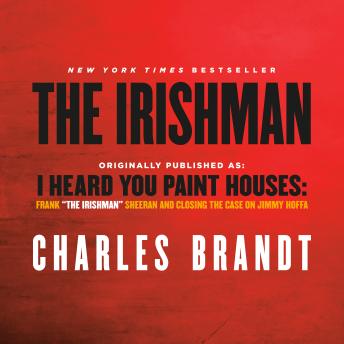 The Irishman (Movie Tie-In): Frank Sheeran and Closing the Case on Jimmy Hoffa

ORIGINALLY PUBLISHED AS I HEARD YOU PAINT HOUSES

“Told with such economy and chilling force as to make The Sopranos suddenly seem overwrought and theatrical.” —New York Daily News

The Irishman is an epic saga of organized crime in post-war America told through the eyes of World War II veteran Frank Sheeran, a hustler and hitman who worked for legendary crime boss Russell Bufalino alongside some of the most notorious figures of the 20th Century. Spanning decades, Sheeran’s story chronicles one of the greatest unsolved mysteries in American history, the disappearance of legendary union boss Jimmy Hoffa, and it offers a monumental journey through the hidden corridors of organized crime: its inner workings, rivalries and connections to mainstream politics. Sheeran would rise to a position of such prominence that in a RICO suit against The Commission of La Cosa Nostra, the US Government would name him as one of only two non-Italians in conspiracy with the Commission. Sheeran is listed alongside the likes of Anthony “Tony Pro” Provenzano and Anthony “Fat Tony” Salerno.

In the course of nearly five years of recorded interviews, Sheeran confessed to Charles Brandt that he handled more than twenty-five hits for the mob, and Brandt turned Sheeran’s story into a page-turning true crime classic.

Enjoyed this book. It was very interesting. A lot of the book took place in the area where I live so I could picture the landmarks and locations. Scott brick is an excellent narrator and I always enjoy listening to him.

A fascinating book and the narrator sounded distinct.

Two engaging stories: one of the events, and one of revelation, equally compelling, revealing. Well written, superbly narrated.

Awesome. Couldn’t stop listening. Can’t wait for the movie the end of the month

As a life long Teamster. I found this book very informative. I highly recommend this book.

Awesome book, if you ever wondered about the assassination of JFK and the disappearance of Jimmy Hoffa you definitely need to give it a listen. I have researched a lot of books about Mafia members and it was really interesting to hear how they were tied in.

The mafia and the Hoff disappearance are two subjects that have always been very interesting to me. So this book was right up my alley. After listening to it I was quite surprised that unlike most first person mafia type books it didn't seem like bragging or trying to convince you there was a good reason to kill. The more I listened the more I enjoyed. The part about Hoff was great and having read several books on the subject his account seems the most plausible. Sadly he didn't bury Mr. Hoffa in the end zone of Giants Stadium as I had hoped. If you enjoy reading about the mafia listen to this book. If you're looking for closure to the Hoffa case.... Well as I said this is the most plausible account I've read but the while Hoffa is mentioned a lot in the book. It was surprising how small the section about his fate was. If you want to learn more about Hoffa and the mafia you'll love this book. Sorry for making my review longer then the book itself, but I hope it was helpful.

This title is due for release on November 11, 2008
We'll send you an email as soon as it is available!