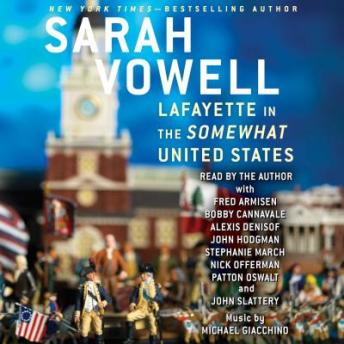 Lafayette in the Somewhat United States

From the bestselling author of Assassination Vacation and Unfamiliar Fishes, a humorous account of the Revolutionary War hero Marquis de Lafayette—the one Frenchman we could all agree on—and an insightful portrait of a nation's idealism and its reality.

On August 16, 1824, an elderly French gentlemen sailed into New York Harbor and giddy Americans were there to welcome him. Or, rather, to welcome him back. It had been thirty years since the Revolutionary War hero the Marquis de Lafayette had last set foot in the United States, and he was so beloved that 80,000 people showed up to cheer for him. The entire population of New York at the time was 120,000.

Lafayette's arrival in 1824 coincided with one of the most contentious presidential elections in American history, Congress had just fought its first epic battle over slavery, and the threat of a Civil War loomed. But Lafayette, belonging to neither North nor South, to no political party or faction, was a walking, talking reminder of the sacrifices and bravery of the revolutionary generation and what they wanted this country to be. His return was not just a reunion with his beloved Americans, it was a reunion for Americans with their own astonishing singular past.

Lafayette in the Somewhat United States is a humorous and insightful portrait of the famed Frenchman, the impact he had on our young country, and his ongoing relationship with some of the instrumental Americans of the time, including George Washington, Alexander Hamilton, Thomas Jefferson, and many more.

This title is due for release on October 20, 2015
We'll send you an email as soon as it is available!