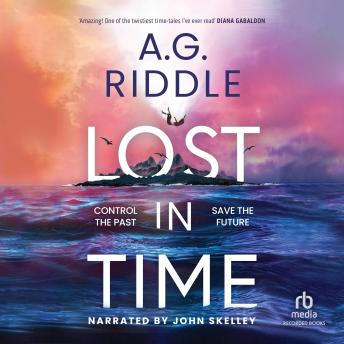 'Amazing! One of the twistiest time-tales I've ever read ...'—Diana Gabaldon

'Crichtonesque thrillers don't come much better than this intricate outing which combines a fantastic premise … with a closed-circle whodunit. Readers won't be able to turn the pages fast enough.'—Publishers Weekly, starred review

PANGEA, 202,320,641 BC
Quantum physicist Sam Anderson is trapped, 202 million years in the past. Sam has helped create a machine able to unpick the threads of spacetime, casting objects eternally into the
past. It’s useful only as a permanent means of disposal—and in a world where criminals need to be punished, that’s exactly how it will be used.

But Sam’s invention will become his undoing, the judicial penalty for a crime that he confessed to, but didn’t commit. It’s a death sentence.

Now he’s on a raw and hostile planet, stalked by dinosaurs, in the midst of a mass extinction event, and unlikely to survive the night. But he can’t give up, because he has to save his family, who are 202 million years in the future …

UNITED STATES, AD 2027
Adeline is an orphan—her mother died three years ago when she was sixteen, and her father is lost 202 million years ago, in the late Triassic.

Adeline knows he sacrificed his life to save hers, but her determination to find the truth reveals more questions. What has unnerved her father’s ex-colleagues? What are they secretly digging for in the desert?

Adeline will do whatever it takes to get to the truth, because somewhere, 202 million years in the past, her father is still alive …

This title is due for release on September 1, 2022
We'll send you an email as soon as it is available!