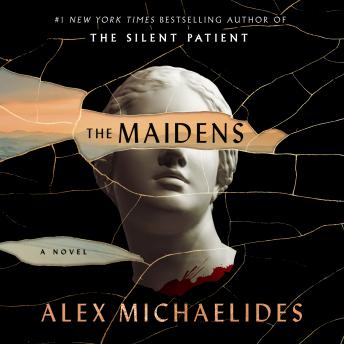 The Maidens: A Novel

'Between the three of them, author Alex Michaelides and narrators Louise Brealey and Kobna Holdbrook-Smith cast a spell that will have listeners glued to this suspenseful novel every chance they get.' -- AudioFile Magazine, Earphones Award winner

'The audiobook is narrated primarily by actor Louise Brealey, who has given life to complex female characters in the audio editions of The Girl on the Train and The Silent Patient, Michaelides’ first novel. Here, she does an excellent job of conveying Mariana’s confusion, courage and determination to solve the mystery at any cost. Actor Kobna Holdbrook-Smith’s nuanced performance as the killer reminds us that monsters are made, not born, and that within even the most heinous murderer is a shattered, lonely child.' -- Booklist (starred audiobook review)

'Listeners will not be disappointed with this suspenseful and intelligent thriller.' -- Booklist (starred review)

From the #1 New York Times bestselling author of The Silent Patient comes a spellbinding tale of psychological suspense, weaving together Greek mythology, murder, and obsession, that further cements “Michaelides as a major player in the field” (Publishers Weekly).

Edward Fosca is a murderer. Of this Mariana is certain. But Fosca is untouchable. A handsome and charismatic Greek tragedy professor at Cambridge University, Fosca is adored by staff and students alike—particularly by the members of a secret society of female students known as The Maidens.

Mariana Andros is a brilliant but troubled group therapist who becomes fixated on The Maidens when one member, a friend of Mariana’s niece Zoe, is found murdered in Cambridge.

Mariana, who was once herself a student at the university, quickly suspects that behind the idyllic beauty of the spires and turrets, and beneath the ancient traditions, lies something sinister. And she becomes convinced that, despite his alibi, Edward Fosca is guilty of the murder. But why would the professor target one of his students? And why does he keep returning to the rites of Persephone, the maiden, and her journey to the underworld?

When another body is found, Mariana’s obsession with proving Fosca’s guilt spirals out of control, threatening to destroy her credibility as well as her closest relationships. But Mariana is determined to stop this killer, even if it costs her everything—including her own life.

'Stunning... The intelligent, cerebral plot finds contemporary parallels in Euripides's tragedies, Jacobean dramas such as The Duchess of Malfi, and Tennyson's poetry. The devastating ending shows just how little the troubled Mariana knows about the human psyche or herself. Michaelides is on a roll.'
—Publishers Weekly, starred review

'A deliciously dark, elegant, utterly compulsive read—with a twist that blew my mind. I loved this even more than I loved The Silent Patient and that's saying something!'
—Lucy Foley, New York Times bestselling author of The Guest List

I was expecting it to be much more thrilling, but it was okay.

This is not worth reading. the plot twist is predictable, and it has many plot holes. definitely read the patient if you’re going to read this author

Delicious: Couldn't stop listening. Easily a 10. THE narrator is wonderful as well.. SHE puts her feelings into the words..

Not as good as the silent patient, but not terrible. A bit cliche and overdramatic to be honest. I liked the narrator though.

Alex Michaelides is a methodical mystery writer. The ending is unexpected. There are cross references from this story to his other book The Silent Patient.

Fantastic book. Kept me engaged until the end!

AMAZING. I didn’t want it to end. I hope this author continues to write more books and I genuinely hope this is made into a movie.

I enjoyed the mystery of it. The narrator was good and the story kept me engaged.

Ending came out of no where and it seemed as if every other character was there to just be distraction.

very good! kept me entertained and guessing all the way through.

love it. I was pulled into the story right away

Really enjoyed this book! The character development was great, the plot was well thought out, and the twists kept me guessing! I was pleasantly surprised by the bit of intertwining between this and the Silent Patient. Both narrators did a great job, I hope there will soon be a book about Fred! This would make a good short TV series.

Ecchhh. I disliked this book almost as much as I loved the author's first book. The cross references between the 2 books were pretty cool though.

Good narrator tho I did speed it up a tich. Underwhelming story.

I liked this book better than The Silent Patient which I figured out far too soon. I was genuinely surprised by some of the twists in this one.

His first book was really good and exciting This was interesting but slow. Ending was unsatisfactory and seemed really concocted

I don't like to leave reviews for books I don't care for. The author works so hard and who am I to criticize. But this book is so pushed and talked about I was excited to read it. I didn't like the main character she is weak and sniveling. I can't find anything I did like about it. The story is weak as the main character. the ending is so predictable it was a waste of time.

This book was fantastic!! It kept you guessing and not at all predictable!! I absolutely loved the story line and both narrators!!! I truly wish this author had more books!!! It's been a long time since I've read something this good.

So good. I was pleasantly surprised, after finishing The Silent Patient, that Alex had another book that had just come out a few days before. This was just as good if not better!

This title is due for release on June 15, 2021
We'll send you an email as soon as it is available!