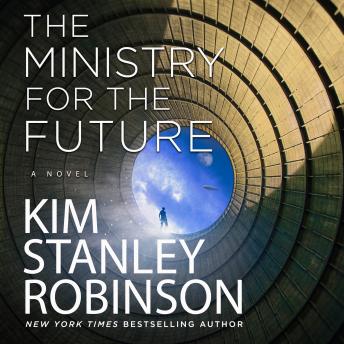 The Ministry for the Future: A Novel

The Ministry for the Future is a masterpiece of the imagination, using fictional eyewitness accounts to tell the story of how climate change will affect us all. Its setting is not a desolate, postapocalyptic world, but a future that is almost upon us—and in which we might just overcome the extraordinary challenges we face.

It is a novel both immediate and impactful, desperate and hopeful in equal measure, and it is one of the most powerful and original books on climate change ever written.

One of Barack Obama's Favorite Books of 2020

"If I could get policymakers, and citizens, everywhere to read just one book this year, it would be Kim Stanley Robinson’s The Ministry for the Future." —Ezra Klein

"A breathtaking look at the challenges that face our planet in all their sprawling magnitude and also in their intimate, individual moments of humanity." —Booklist (starred)

"A sweeping, optimistic portrait of humanity's ability to cooperate in the face of disaster. This heartfelt work of hard science-fiction is a must-read for anyone worried about the future of the planet." —Publishers Weekly (starred)

"The Ministry for the Future ranks among Robinson's best recent works, a collection of actions and observations that adds up to more than the sum of its eclectic and urgent parts." —Sierra

It was ok. I might have given it only a 2, but the subject matter is real and important and the author tried to tackle a real and serious issue on the proper scale, an ambition which I thought is worth some credit. Overall, despite efforts to be otherwise, the story was too abstract and aloof, and far too optimistic. It begins well I think, in the midst of an on-the-ground view of a climate catastrophe that catalyzes a genuine human effort to rein in our destruction of the climate. However, besides a later riot at a refugee camp, that's the high-point of the tension. These are the only times we are made to feel the horror of almost going extinct as a species, almost succumbing to a chaotic collapse into global violence. After that, things more or less work. All of the geoengineering and technological gambles pay off with minimal unforseen consequences. If there are other climate catastrophes that occur, they are summarized briefly from comfy Zurich perches of, shall we lovingly say, heavily-left-brained UN appointees (around whose mundane lives a good third of the story revolves). The heroic terrorists never succumb to corruption or infighting, and none of the world governments, oligarchs, or the most powerful military in the world, are able to mount any kind of resistance to them or curb their activities. The plutocrats more or less accept their haircut and give up their excessive wealth and power. The economic effects of the Carbon Coin are all positive. In no country does fascism or ethnic violence reach a critical mass. People, globally, actually voluntarily agree to limit population growth and reserve half of the Earth for ecological re-wilding. The ecological and sociological consequences of the massive mining and industrial activity necessary to build the green energy infrastructure - and the oppression of the banana republics likely to facilitate this mining and industry - are not mentioned, even as a possibility. Much narrative potential is lost by not taking the point of view of any of the members of the shadow wing of the Ministry of the Future over the course of the story. At the end of the story, our minds remain un-prepared for the torrent of tragedy that is sure to befall us in the near future, even if we succeed in curbing the carbon-related aspects of the ecological devastation humans wreak upon the environment. Still, the scope of the story was impressive. I'm sure much of the abstractness was necessary just to hold the span of the narrative world in one mind. I also liked that characters are voiced by people from the same or similar regions of the world, though I'm not qualified to say how accurate all that ended up being.

this book is like reading future history, a novelization of global warming from the perspectives of an aid worker, a policy lead, a displaced person, and various other players including carbon itself. extraordinary. perhaps not a book for everyone, but for me it gave me some hope.

Important and visionary book, must read!

Really enjoyed this book. A real roadmap for the future. Some of the accent impressions were super cringe though.

Must read. Better for a "what if [x] happened" when considering the future kind of mood, less a book for a riveting read. This is a story of a future you could actually see happening as a realist, even if you're a pessimist, and yeah, optimists can handle it too. If you're an activist, a business owner, a parent, a teacher, a retiree, a teenager, or any other thing humans identify as, read this. It's important. Personally I also found it pretty entertaining, but incredibly prescient. There's only hope if we give it a reason to exist.

Mr. Robinson, a greatly respected SF writer, can’t seem to find a fictional narrative in his passion for climate science. I am as concerned as anyone about climate degradation, but I want story in fiction, not a lecture.

I do not read, watch or listen to science fickton. I was recommended this through a podcast and I am thankful. I loved the clever ideas and integration of real world challenges with often believable possible solutions. There is an overwhelming sense of doom with tinctures of hope. Block chain, geoengineering, UBI, decarbonising,are a few of the issues dealt with I wnjoyed it.