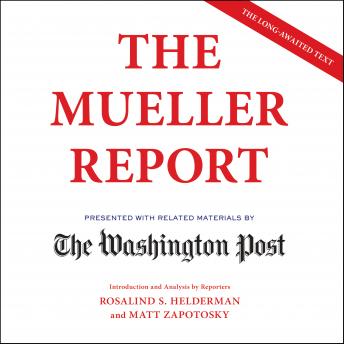 ONE OF TIME’S 100 BEST BOOKS OF THE YEAR

“The Mueller report is that rare Washington tell-all that surpasses its pre-publication hype…the best book by far on the workings of the Trump presidency.” —Carlos Lozada, The Washington Post

The only book with exclusive analysis by the Pulitzer Prize–winning staff of The Washington Post, and the most complete and authoritative available.

Read the findings of the Special Counsel’s investigation into Russian interference in the 2016 election, complete with accompanying analysis by the Post reporters who’ve covered the story from the beginning.

This edition from The Washington Post/Scribner contains:

—An introduction by The Washington Post titled “A President, a Prosecutor, and the Protection of American Democracy”

—A timeline of the major events of the Special Counsel’s investigation from May 2017, when Robert Mueller was appointed, to the report's delivery

—A guide to individuals involved, including in the Special Counsel’s Office, the Department of Justice, the FBI, the Trump Campaign, the White House, the Trump legal defense team, and the Russians

One of the most urgent and important investigations ever conducted, the Mueller inquiry focuses on Donald Trump, his presidential campaign, and Russian interference in the 2016 election, and draws on the testimony of dozens of witnesses and the work of some of the country’s most seasoned prosecutors.

The special counsel’s investigation looms as a turning point in American history. The Mueller Report is essential reading for all citizens concerned about the fate of the presidency and the future of our democracy.

Everyone should feel obligated to read/listen to this.

Although I was shocked and disturbed by the contents of the Mueller report, being able to listen to it first hand rather than having pundits with their own bias tell me their conclusions was well worth it. And if it wasn't in audio book form I never would have had the time to sit down and read it. I especially think the book marks feature will be invaluable for a work like this.

Awful to listen too, it would be better to read. You don’t have to hear foot note and redacted on every other statement. It’s basically repetitive and a lot about nothing. It makes me sick to think that the time and money spent on this BS. Don’t waste your time.

This title is due for release on April 20, 2019
We'll send you an email as soon as it is available!