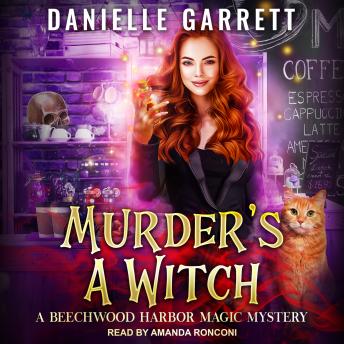 Well, technically, she has lots of them. After a scandal uproots her entire life, she is forced to relocate to a halfway house for displaced paranormals. It's her last shot for a fresh start. But keeping secrets isn't easy in a town that goes through gossip faster than tissue paper, even for a powerful witch.

When a grisly murder rocks the small town of Beechwood Harbor, Holly finds herself unwillingly entangled in the investigation. With everyone watching, Holly must solve the case before she's forced to abandon her new-found home. But with a paranormal investigator tailing her every move, a civil war brewing between her vampire and shifter roommates, and her ghostly landlord on the edge of a breakdown, she can barely think in complete sentences. How is she supposed to track down a murderer?

Holly has to make it work, or risk losing everything . . . again.

I like the storyline in that it gave us something to look forward to in the upcoming books about why Holly was actually exiled to the normal world. The narration was pretty good. Some of the voices she use for the characters were a little bit unbelievable but for the most part I enjoyed efforts to make sure the voices for different characters were or distinct.

I love this book series

i really enjoyed it. narration was great

really enjoy this author and the narrator great paranormal mystery

This is not a bad 3 - it’s an ‘I loved it and want read the next one 3’! Seriously it’s not the best book I’ve ever read, but it’s lots of fun and the characters are quirky with cheeky little glints in their eyes. A good holiday read that you’ll find yourself chuckling at - and a good crime story to go with it. Lot’s of fun!

Fun book read by one of my favorite audiobook narrators.

I love Amanda Ronconi narrations, the book had good characters and intriguing storyline. Danielle Garrett is a good storyteller.

A very enjoyable listen. Good story, good narration. It is in the same vein as the Stacy Justice series by Barbra Annino but the Holly is different to Stacy, more accomplished and experienced in magic but just as likeable. I look forward to listening to more in the series.

This title is due for release on January 30, 2018
We'll send you an email as soon as it is available!