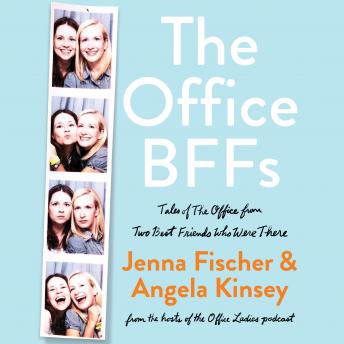 The Office BFFs: Tales of The Office from Two Best Friends Who Were There

An intimate, behind-the-scenes celebration of beloved The Office co-stars Jenna Fischer and Angela Kinsey’s friendship, and an insiders' view of Pam Beesly, Angela Martin, and the iconic TV show.

Receptionist Pam Beesly and accountant Angela Martin had very little in common when they toiled together at Scranton’s Dunder Mifflin Paper Company. But, in reality, the two bonded in their very first days on set and, over the nine seasons of the series’ run, built a friendship that transcended the show and continues to this day. Sharing everything from what it was like in the early days as the show struggled to gain traction, to walking their first red carpet—plus exclusive stories on the making of milestone episodes and how their lives changed when they became moms—The Office BFFs is full of the same warm and friendly tone Jenna and Angela have brought to their Office Ladies podcast.

loved the behind the scenes story of Jenna and Angela. How their friendship grew and the family they found through a show that has brought laughter to many people .

Excellent, loved it, lots of laughs

LADY!!! I laughed, I cried. I listen to books while working night shift stocking shelves... and I couldn't finished the book at work, I was crying, I mean any actual fans of The Office will understand this. Hearing their voices read their book... hearing voices from the show, hearing Ed Helms play banjo. Everything about this book was perfect. I loved the book and I love their podcast, I feel like they are also my BFFs

After listening to the Office Ladies podcast since it’s beginning, this book was a very exciting thing to purchase. I so looked forward to reading as I listen along to Jenna and Angela themselves. It really is such a special book made far more incredible by this audio book!

This was one of the best books I've gotten in a while. The office is one of my favorite shows so this book was amazing. Hearing all the little details from the show and their lives made it so great. I haven't laughed that much while reading/listening to a book ever.

Loved it! Light and fun!

love love love❤❤ could listen to them all day

This title is due for release on May 17, 2022
We'll send you an email as soon as it is available!