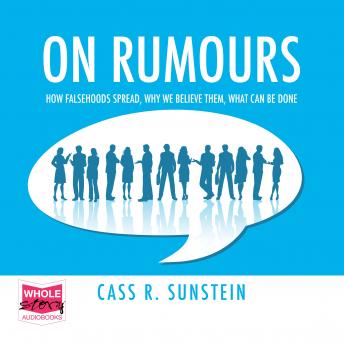 On Rumours: How Falsehoods Spread, Why We Believe Them, What Can Be Done

Rumours are as old as human history, but with the rise of the internet it's now possible to spread stories about anyone, anywhere, instantly. In the 2008 US election many Americans believed Barack Obama was a Muslim. The conspiracy theory book 9/11: The Big Lie has become a bestseller. Hearsay has fuelled economic boom and bust - so much so that in many places it's now a crime to circulate false rumours about banks. Why do ordinary people accept rumours, even untrue, bizarre or damaging ones? Does it matter? And, if so, what should we do about it? As Cass Sunstein shows in his brilliant analysis of the phenomenon, there are many different ways in which rumours are dispersed. He reveals how some people have pre-exisiting prejudices that make them particularly susceptible to certain falsehoods, but also why all of us (even the most sceptical) have a tipping point at which we will come to accept a rumour as true. He looks at why some groups, even different nations, believe different things (for example, many Germans think that drinking water after eating cherries is deadly), and he shows why some rumours spread faster than others. Even if we don't realize it, the most open-minded among us are subject to extraordinary biases. This groundbreaking book will make us think harder about the information we are given, and could help us move towards a more open-minded and fair culture.

'More than just a book: It's a manifesto.' PROSPECT

It is my interpretation the writer is biased in his examples. I think the content is interesting or I would not have decided to read the book. However my beliefs are not the writers.

This title is due for release on December 19, 2019
We'll send you an email as soon as it is available!