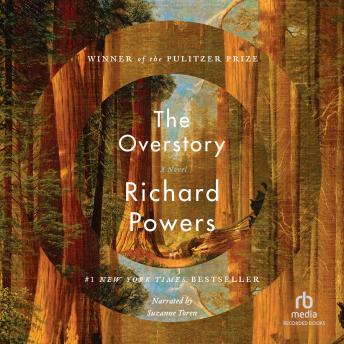 A monumental novel about reimagining our place in the living world, by one of our most 'prodigiously talented' novelists (New York Times Book Review). The Overstory unfolds in concentric rings of interlocking fable that range from antebellum New York to the late twentieth-century Timber Wars of the Pacific Northwest and beyond. An air force loadmaster in the Vietnam War is shot out of the sky, then saved by falling into a banyan. An artist inherits a hundred years of photographic portraits, all of the same doomed American chestnut. A hard-partying undergraduate in the late 1980s electrocutes herself, dies, and is sent back into life by creatures of air and light. A hearing-and speech-impaired scientist discovers that trees are communicating with one another. These and five other strangers, each summoned in different ways by trees, are brought together in a last and violent stand to save the continent's few remaining acres of virgin forest. There is a world alongside ours-vast, slow, interconnected, resourceful, magnificently inventive, and almost invisible to us. This is the story of a handful of people who learn how to see that world and who are drawn up into its unfolding catastrophe.

love this book! the narrator is really great for the most part but was a bit hard to listen to while she was imitating non-native english speakers

Plan on listening to this audio book when you have some big blocks of time as it is nearly 23 hours long with lots of characters in there own stories many of which are not brought together until the end. The narrator Suzanne Toren May be the best I've ever heard and the book would be worthwhile on just her talent. But the book stands on its own and I plan to buy and read it again soon. It's interwoven with cutting edge science that is also an important part of the story. It is a book about trees and the environment at baseline but filled also w people and complex relationships and truly a mystery how all will be brought to a cohesive ending. Happy ending to be determined!

Narration was phenomenal! The subject matter held me thru all 22 hours. Very thought provoking.

I love this book and this author. If nature, ecology, and or trees interest you then this is a book for you.

I loved this book and also the narrator. It is long, but I used it as incentive to go for long walks.

I loved this book and didn't really think I would. I found it a little difficult in the beginning, but as I started feeling the different stories merge it became exciting! Storyline is very relevant today.

I tried reading this in book form for a book discussion group and because it is so long, I switched over to this audio edition which was much easier. This is a difficult book to critique. I was a teenager in the late 60s/70s and found a lot of the material (regarding nature and Man) to be repetitive (although it also includes some new research and discoveries) but I guess if you have had your eyes closed for the past twenty years or so, then this material would be very edifying and urgent. The characters' stories within the novel can be interesting but also very long and drawn out, as are the descriptions of "the Understory" - which is Powers' opposite to the "Overstory." People either love or hate this book, I am told. I found it very difficult for the reasons stated; that said, it is well worth the trouble of getting through it if you really get the message of the book - that Man has been taking, using, and then destroying the ecological world, and it is now time for Man to pay the bill; or get with it and do something to change it. The narrator is very good. She has a quiet, calm voice which I think the material requires.

Very beautifully written book with sobering message for us Earthlings. The narrator was excellent as well, mastering several very different voices. I was very glad to be listening to this book, rather than reading it’s densely descriptive prose. It would’ve taken me much longer to read (and likely have to re-read parts).

Loved it and loved learning about the trees. Beautifully written.

One of the best books in a long time, although it initially seemed like a random collection of short stories. It gave me a greater appreciation of environment and Ive been planting more trees as a result

Wierdly engaging. The aside from its deep lesson, however, almost pointless as a STORY. More like an ode or philosophical allegory, but scarcely a “book”. P.S. i liked it!

Author is well informed/researched, masterfully weaves lives of people and trees into a fantastic story. Audio book is a great accompaniment to gardening!

A great book and a talented narrator. The narrator changes her voice to mimic children and a major character with a hearing problem and a resulting speech impediment. This means you'll listen to some fairly grating sections in a high pitched whine or fake deaf speech. You'll love this recording if you appreciate a dramatized audiobook, but it was a little much for me.

Take your time with this book, it is dense with a thoughtful storyline and expressive writing. You will never look at the trees in your backyard the same way!

Meh. I do not recommend listening to on audiobook. I imagine this would be a much better visual read. I think the concept behind the book could have been illustrated much better. Then again, maybe that’s because the narration on audiobook was so boring and awful that I zoned out....constantly.

This title is due for release on April 3, 2018
We'll send you an email as soon as it is available!