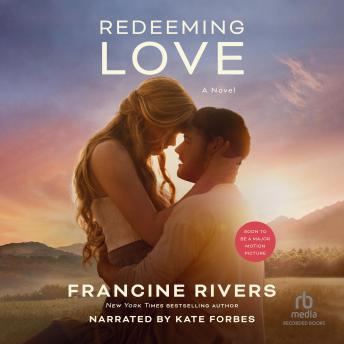 California’s gold country, 1850. A time when men sold their souls for a bag of gold and women sold their bodies for a place to sleep.

Angel expects nothing from men but betrayal. Sold into prostitution as a child, she survives by keeping her hatred alive. And what she hates most are the men who use her, leaving her empty and dead inside.

Then she meets Michael Hosea, a man who seeks his Father’s heart in everything.

Michael obeys God’s call to marry Angel and to love her unconditionally. Slowly, day by day, he defies Angel’s every bitter expectation until, despite her resistance, her frozen heart begins to thaw.

But with her unexpected softening comes overwhelming feelings of unworthiness and fear. And so Angel runs. Back to the darkness, away from her husband’s pursuing love, terrified of the truth she no longer can deny: her final healing must
come from the One who loves her even more than Michael does … the One who will never let her go.

A powerful retelling of the story of Gomer and Hosea, Redeeming Love is a lifechanging story of God’s unconditional, redemptive, all-consuming love.

Amazing book for anyone who desires to love their wife. Work to love unconditionally showing Christ's love to your spouse.

This was my first book on audiobooks and it has made me a believer. Loved this book!

This is a wonderful book! A sweet way of revealing God’s redemptive love for his children.

This is the best book ever! I have recommend it to all my friends and family.

After a few years of audiobooks I have to say Francine Rivers is my absolute fav author. I didn't know I like historical/religious/romance books but I could listen to anything by this author and be 1000% satisfied with the buy. This is one of my 2 fav books- you will fall in love with the characters. Its a deep soul touching story.

Very challenging as I look at how I love my wife. Also, very good at showing God's unconditional love.

Not for me. Christian romace could be better than this.

It just goes on and on and on and on... main characters keep making same mistakes. Very redundant. I knew exactly what was going to happen. I guess this book has its place, but good literature it is not.

I loved this book. I even cried a little. Beautifully written.

Good story apart from being very religious, personally I just found that part annoying and unnecessary. Narrator kept gulping and making noises whilst recording which is off putting. mostly it was a good storyline.

This turned out to be a really good read. Easy to follow, quite a spiritual book as it turned out, something I wouldn’t normally go for, but really enjoyed nevertheless

The story was good. Following Hosea's experience is a creative idea. Definitely it gave me a lot to think about in the way of forgiveness and commitment regardless of stuff. The narrator was fine, definitely reading.

Excellent! This is definitely one of the best love story's I have read in a very long time. Great narrator! I look forward to more of Francine Rivers

The lack of consent and manipulation through a Christian tradition in this book made me feel sick. I tried to push through because I appreciate the story of her beginning to trust people again despite lots of trauma, but I don’t like how it all went down. It gives me covert yucky vibes. The worst thing you can do to a trauma survivor is control them and tell them what’s best for them. They need constant safety and consent and empowering. So sad.

Love love love this book in every form. I’ve read it, watched the move, and listened to it now. I bawl my eyes out every time. It’s such a beautiful retelling of Hosea’s story. I would highly recommend it in every form!!!

Profound and deeply moving book about God's unconditional love for us. The characters were extremely well written-you knew them all well. Highly recommend.

If I could, I would rate it 10 stars! Read the book many years ago, went to watch the movie, and then did the audiobook. Wow! What an amazing love story... Between Michael and Angel, and between God and Michael and God and Angel. Francine Rivers so masterfully intertwine God's redeeming love with Michael and Angels love. I was so sad when I finished the book, that I just feel like starting it again from the beginning.

It was wonderfully written and read, and very insightful. It makes you want to delve into the word of God more and see love in a different light. It also touches deeper issues and gives a view into various perspectives.

I knew about Hosea in the Bible and loved how Angel and Michael’s story portrayed the story of Hosea and his wife. There were many times that I disliked how Angel was so stubborn but that’s how we are in life too, we’re all stubborn and need a Saviour. Loved all the biblical references. A must read! Can’t wait to read more of Francine’s books.

This is my new favorite. After finishing it I immediately wanted to listen again. Super great! The narrator did a great job too!

Great story. The last quarter of the book surprised me.

Beautiful love story. I thought the narrator was brilliant too. Its a tale I won't forget. I would read it and read it again. I have given it 5 stars because it pulled at my heart strings and made me cry and laugh.

I have always loved this book and was super excited to now be able to listen to it as well.

Absolutely LOVE this book. One of my absolute favorites. I’m listening to it for the second time. Such a beautiful representation of the Father’s love for us! <3

I read this book years ago and listening again is so rewarding. What a perfect picture of Gods Redeeming love and how His kindness draws us to redemption and freedom.

Loved the book and the narrator did a great job also. I recommend it to everyone, young and older who want to learn what is unconditional love is and see how God works in the life of people.

This book is one of my favorite reads! I read it many years ago, so I decided to try it on audiobook, and wasn’t disappointed.

love this story! Some beautiful life lessons to apply in ones own experience, also in our attitudes another experience in life.

Loved the story and the biblical references.

It is a beautiful story

This title is due for release on June 20, 2008
We'll send you an email as soon as it is available!