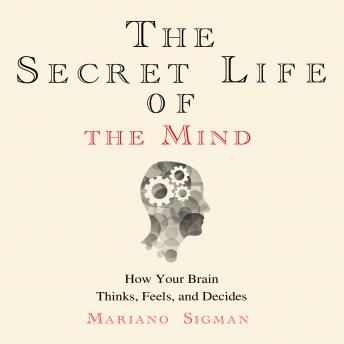 The Secret Life of the Mind: How Your Brain Thinks, Feels, and Decides

Where do our thoughts come from? How do we make choices and trust our judgments? What is the role of the unconscious? Can we manipulate our dreams? In this mind-bending international bestseller, award-winning neuroscientist Mariano Sigman explores the complex answers to these and many other age-old questions. Drawing on research in physics, linguistics, psychology, education, and more, Dr. Sigman explains why people who speak more than one language are less prone to dementia, how infants can recognize by sight objects they've previously only touched, how babies - even before they utter their first word - have an innate sense of right and wrong, and how we can read the thoughts of vegetative patients by decoding patterns in their brain activity. The cutting-edge research presented in The Secret Life of the Mind revolutionizes how we understand the role that neuroscience plays in our lives, unlocking the mysterious cerebral processes that control the ways in which we learn, reason, fee l, think, and dream.

This is another fascinating look at the development and workings of the human brain. Sigman begins by looking at the brains of babies and toddlers, that period of life we all go through, and yet have few if any memories of. We tend to think of babies' brains as very simple, but there is in fact a lot of complex activity going on inside those little heads. Babies, by the time they are five months old, can respond to puppet shows that show puppets that help another puppet, and puppets that show another puppet that refuses to help. When offered a choice between the helpful puppet and the unhelpful puppet, the babies prefer the helpful puppet. That's an oversimplified description, but children as young as five months can already choose, and express the choice, for kinder, more helpful behavior. There are other experiments described here that show more complex moral choices babies and very young children are able to make. Children also learn language more readily than we might expect, including learning multiple languages. Being raised bilingual slows correct language acquisition a little bit initially, but overall become better at both languages--and more flexible in their approach to solving problems that have no connection to linguistics. And if the particular problem is one where emotion is getting in the way, switching to their second language enables them to be more objective and analytical. Oh, and people who are fluent in two or more languages appear to be less likely to develop dementia. So, think about that the next time you're deciding how you feel about your young children learning from their other parent or your in-laws a language you don't speak and don't think you want to learn. It's good for your kids' long-term health, and learning with them might be good for you, too. Later sections of the book address how we make decisions, what consciousness is for, and the malleability and flexibility of the brain. Emotion is important to making rational, constructive decisions; one famous example of this is the case of Phineas Gage, an American railroad construction engineer, who in the course of working with explosives received a steel spike through his brain. It destroyed much of his left frontal lobe, and he unexpectedly survived. However, the previously capable, responsible, reliable man who had been like and respected by those he worked with, became profane, unreliable, and obnoxious. His intellect didn't seem to have suffered, but his behavior certainly had. He was said to be "no longer Gage," lost his job, and moved on. Yet in the years after the accident, he eventually recovered the faculties and normal behavior that had made him liked and respected before the accident. He's important to the development of our understanding of localization of functions in the brain. He's also a documented example of the brain essentially rewiring itself, to regain functions lost to brain damage. Sigman also discusses success in establishing very basic communication with "vegetative" patients. It is now possible to learn to read brain activity in at least some of these patients, and create a basic yes/no communication system. This is very long way from direct, complex, flexible communication, but it's a start, and very interesting. He also discusses how our growing understanding of neurology can possibly help us develop more effective educational practices for our schools. Overall, this is an interesting and readable/listenable book on the brain, and well worth your time. Recommended. I bought this audiobook.

This title is due for release on November 7, 2017
We'll send you an email as soon as it is available!