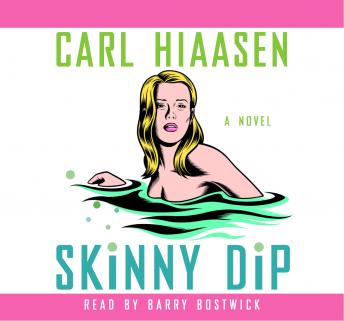 Chaz Perrone might be the only marine scientist in the world who doesn’t know which way the Gulf Stream runs. He might also be the only one who went into biology just to make a killing, and now he’s found a way–doctoring water samples so that a ruthless agribusiness tycoon can continue illegally dumping fertilizer into the endangered Everglades. When Chaz suspects that his wife, Joey, has figured out his scam, he pushes her overboard from a cruise liner into the night-dark Atlantic. Unfortunately for Chaz, his wife doesn’t die in the fall.

Clinging blindly to a bale of Jamaican pot, Joey Perrone is plucked from the ocean by former cop and current loner Mick Stranahan. Instead of rushing to the police and reporting her husband’s crime, Joey decides to stay dead and (with Mick’s help) screw with Chaz until he screws himself.

As Joey haunts and taunts her homicidal husband, as Chaz’s cold-blooded cohorts in pollution grow uneasy about his ineptitude and increasingly erratic behavior, as Mick Stranahan discovers that six failed marriages and years of island solitude haven’t killed the reckless romantic in him, we’re taken on a hilarious, full-throttle, pure Hiaasen ride through the warped politics and mayhem of the human environment, and the human heart.

Set in a place where most people only vacation--Florida--this is an excellent book for summer reading. It keeps you reading and it keeps you laughing. Its characters and plot are so over the top that your everyday life disappears from view.

A little predictable, but a fun read anyway. There was some good laughs and fun along the way, and overall I did enjoy this quick little read.

It was a fun short book. Not a lot of surprises, but entertaining.

This was a great book! Hope he has more like it. It is hilarious and A fun book to listen to. Really did enjoy it.

Fun read on the way to work, at lunch, and on the way back home! There were several spots in the story that I had to rewind just to listen again... I really enjoy laughing, so when parts of this book made me laugh, I did a rewind. Great listen and funny at times.

Cute, the language was witty and made me chuckle a lot. Just a very entertaining piece, but definitely not deep.

This was a fun book. I especially enjoyed the revenge she got on her narcissistic husband. Good quick read.

WARNING this is not a children's Novel. Carl Hiaasen has written great kids novles, this one is not for children, but it is a great novel. I rented this one thinking it is another children's book, I am glad I listened to it first before I was going to give it to my kids. It has more than it's share of F-words and other choice words, which is fine with an adult audience. The character development is excellent in this story and it "reads" very easy. I enjoyed it very much.

I loved this book. It was so funny I laughed outloud. My husband heard me laughing and I had to listen to the entire book over again so he could catch up. He loved it also. Great listen for our stressful times.

Very humorious. Loved the characters he developed and will definitely rent another Hiassen book.

A fun read. When I got to the end of the book I drove around the block a few times before going home.

Hiaasen is a great humerous writer. The way he develops a mystery plot with outlandish characters is sure to tickle your funnybone and appease your sense for mystery. I enjoyed this book and look forward to the next one I receive.

After this book I immediately put Carl Hiaasen's other books in my queue. He brings these characters to life while weaving humor throughout the story. Quirky, lively, and full of fun.

Carl is good, especially if you are from FLA. This one was ok compared to some others I've read. Got through it pretty quickly and laughed out loud a few times.

The circumstances that happen in this book are so hilarious! A very nice light read!

What an enjoyable book. I laughed off and on all the way to work and back.

Actually looking FORWARD to my commute. This book is fantastic. It was obvious from the beginning how the story would end, but it was super to see how Hiaasen got there.

This was intriguing as well as funny, I really enjoyed it and have put others by him on my list.

I keep thinking that someone must have made Carl Hiaasen very angry at some point, because of the elaborate revenge scenarios that he manages to come up with. Skinny Dip brings back some familiar Hiaasen characters, with the same quirks as always. I often found myself chuckling as I listened on the commuter train. Barry Bostwick does a great job with all the different characters.

I rented this because of the great reviews here but wasn’t impressed and found the story unbelievable. Also, the author seems to have an obsession with male genitalia and the f-word. Do people really talk like that?

Very well written and constructed. Very much Carl Hiaasen. Sarcastic with a dry humor and over-stated characterizations and situations. The only drawback being that it is abridged. Definitely worth a listen even in this shortened version.

This is just a FUN book - you won't be a better person, or learn a new skill, or solve a deep problem after listening to this. But you will have several hours of just plain enjoyment (and a few laughs). Sometimes, that's what entertainment is all about.

Hiaasen's most lucrative themes: greed, the despoliation of a once-lush Florida, and redneck low-lifes come together here to create an entertaining romp with a social conscience. A spurned wife, left for dead, returns to undo her ruthless husband's plans. Hiassen has done better, with Lucky You and Native Tongue, but he's done worse, especially Striptease (which of course would be the one Hollywood would pick up). A serious journalist with the Miami Herald, he rips with authority, cutting wit, and a deft pen into those who use Florida's abundance and beauty for their own greedy ends. Had the book been unabridged, it would have rated 5 stars easily.

I seldom laugh out loud when listening to an audio book, but the descriptions and dialogue in this book gave me several hearty chuckles. This book is perfect for the movies. From the really hairy fellow to the brother from New Zealand, the characters in Skinny Dip keep you entertained.

Very clever writer! What a cast of characters...the most absurd, Chaz...no sympathy for this guy...the most normal, our heroine, Joey! Mick? Well lets just say he fits into the story very comfortably. Mr. Hiaasen obviously loves the Evergaldes and his descriptions of same are so vivid that you can almost smell the water. He certainly knows how to turn a phrase and I look forward to hearing some more of his books!

Just a lot of fun. Hiaasen has a good comedic sense to his writing. My wife and I throughly enjoyed this book. I heartly recommend it for your enjoyment.

This isn't the kind of book that will make you rich, or guide you to enlightenment, but it is great for a few hours of entertainment. This is very good writing, with convincing, well-drawn characters, and a plot that meets the reader's expectations without ever becoming predictable. Fun.

This title is due for release on March 31, 2004
We'll send you an email as soon as it is available!