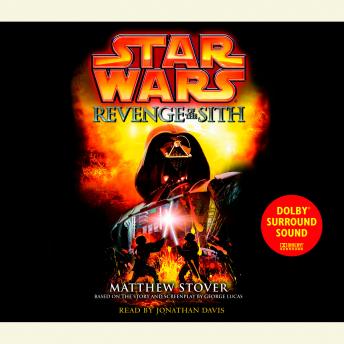 The turning point for the entire Star Wars saga is at hand.

After years of civil war, the Separatists have battered the already faltering republic nearly to the point of collapse. On Coruscant, the Senate watches anxiously as Supreme Chancellor Palatine aggressively strips away more and more constitutional liberties in the name of safeguarding the Republic. Yoda, Mace Windu, and their fellow Masters grapple with the Chancellor's disturbing move to assume control of Jedi Council. And Anakin Skywalker, the prophesied Chosen One destined to bring balance to the Force, is increasingly consumed by his fear that his secret love, Senator Padme Amidala, will die.

As the combat escalates across the galaxy, the stage is set for an explosive endgame: Obi-Wan undertakes a perilous mission to destroy the dreaded Separatist military leader, General Grievous; Palpatine, eager to secure even greater control, subtly influences public opinion against the Jedi; and a conflicted Anakin--tormented by unspeakable visions--edges dangerously closer to the bring of a galaxy-shaping decision. It remains only for Darth Sidious, whose shadow looms ever larger, to strike the final staggering blow against the Republic...and to ordain a fearsome new Sith Lord: Darth Vader.

Based on the screenplay of the eagerly anticipated final film in George Lucas's epic saga, bestselling Star Wars author Matthew Stover's novel crackles with action, captures the iconic character in all their complexity, and brings a space opera masterpiece full circle in stunning style.

"This story happened a long time ago in a galaxy far, far, away. It is already over. Nothing can be done to change it...Though this all happened so long ago and so far away that words cannot describe the time or distance, it is also happening right now. Right here....This is the twilight of the Jedi. The end starts now." These words of Matthew Stover does not lie to you. He tells you this story as anyone would of a foregone conclusion, and yet, you can only keep going. I have listened and read this book over and over, countless times. This is the pinnacle of Star Wars storytelling. If you enjoyed the movie, try this book. If you only liked the movie, try this book. If you felt the movie was flawed and missing something, try this book. If you like Star Wars, TRY THIS BOOK. This is THE book to listen to and try. The moments you love in the movie are here, but there is so much more. It tells about the contest between Anakin and the Force. It tells you about what it feels like to be Anakin Skywalker. This story shows you the folly of the Jedi, the corruption of so many people. This story is every bit the one they should have told in the movie. This is the story every fan should be a apart of. For me, I will never forget the words of Matthew Stover, and I will gladly come back to this story time and time again.

Gave a lot of missing details from the movie that would for perfectly for an extended cut.

Absolutely love this audio book!! it adds so much more to the story of my favorite star wars movie. And the narrator does a great job with it.

Such a great book. The Narrator does a great job also. Highly recommended.

This title is due for release on September 13, 2005
We'll send you an email as soon as it is available!