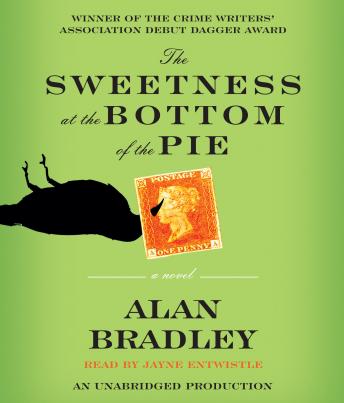 The Sweetness at the Bottom of the Pie: A Flavia de Luce Mystery

In his wickedly brilliant first novel, Debut Dagger Award winner Alan Bradley introduces one of the most singular and engaging heroines in recent fiction: eleven-year-old Flavia de Luce, an aspiring chemist with a passion for poison. It is the summer of 1950—and a series of inexplicable events has struck Buckshaw, the decaying English mansion that Flavia’s family calls home. A dead bird is found on the doorstep, a postage stamp bizarrely pinned to its beak. Hours later, Flavia finds a man lying in the cucumber patch and watches him as he takes his dying breath. For Flavia, who is both appalled and delighted, life begins in earnest when murder comes to Buckshaw. “I wish I could say I was afraid, but I wasn’t. Quite the contrary. This was by far the most interesting thing that had ever happened to me in my entire life.”

To Flavia the investigation is the stuff of science: full of possibilities, contradictions, and connections. Soon her father, a man raising his three daughters alone, is seized, accused of murder. And in a police cell, during a violent thunderstorm, Colonel de Luce tells his daughter an astounding story—of a schoolboy friendship turned ugly, of a priceless object that vanished in a bizarre and brazen act of thievery, of a Latin teacher who flung himself to his death from the school’s tower thirty years before. Now Flavia is armed with more than enough knowledge to tie two distant deaths together, to examine new suspects, and begin a search that will lead her all the way to the King of England himself. Of this much the girl is sure: her father is innocent of murder—but protecting her and her sisters from something even worse….

An enthralling mystery, a piercing depiction of class and society, The Sweetness at the Bottom of the Pie is a masterfully told tale of deceptions—and a rich literary delight.

Quite a surprise an 11 year old sleuth .. wise beyond her years young lady,Flavia. Fun interaction among siblings and mysterious death all the right things for an interesting visit to England with a reader that lets you see the story.

The story is hard to get into at first, but picks up after the first few chapters.

The series and the book are delightful. Ms. Entwhistle's narrative was captivating, everything it should have been. She has an exquisite speaking voice with incredible range. I felt as if I were zipping along the lanes of an English countryside, with my best friend Flavia on her Gladys, me on my Bitsy! Look Flavia, no hands!

I loved this book. It was the first I have heard by Bradley. The choice of narrators was perfect, her accent and voice brought his heroine, Flavia, alive. She is a fantastically loveable character. Smart, funny, brave and sincere, riding her bicycle around town solving the crime. Very fun. Add in a crumbling family estate, need I say more? It took me a full CD to fall into the rhythm, but after that I was hooked. More please.

I can't rate the book it self, because I could not get past the voice of the reader, which is very irritating to me. I quit listening about an hour into the book. I wish I could get a refund. I will write the readers name down and never listen to her again. It was torture, trust me.

I liked this book. Flavia de Luce is entertaining, a bit devilish, and certainly not a typical 11 year old. The narrator, Jayne Erstwhile (?sic) was wonderful. Not for kids, has some dark touches.

Imagine Eloise at the Plaza as a detective - not my cup of tea, but some may enjoy it.

This title is due for release on April 28, 2009
We'll send you an email as soon as it is available!