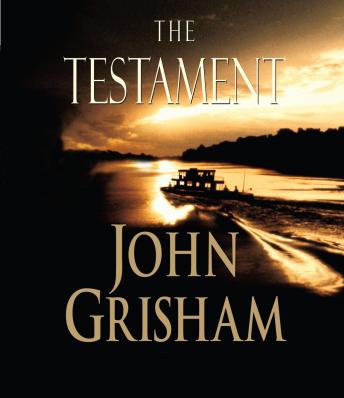 The Testament: A Novel

#1 NEW YORK TIMES BESTSELLER • In a plush Virginia office, a rich, angry old man is furiously rewriting his will. With his death just hours away, Troy Phelan wants to send a message to his children, his ex-wives, and his minions—a message that will touch off a vicious legal battle and transform dozens of lives.

Nate O'Riley is a high-octane Washington litigator who's lived too hard, too fast, for too long.  His second marriage in a shambles, and he is emerging from his fourth stay in rehab armed with little more than his fragile sobriety, good intentions, and resilient sense of humor.  Returning to the real world is always difficult, but this time it's going to be murder.

Rachel Lane is a young woman who chose to give her life to God, who walked away from the modern world with all its strivings and trappings and encumbrances, and went to live and work with a primitive tribe of Indians in the deepest jungles of Brazil.

In a story that mixes legal suspense with a remarkable adventure, their lives are forever altered by the startling secret of The Testament.

This is my favorite book. It grabs you up right away and you have a very hard time shutting it off. I have listened to it at least four times over the years.

This book was fantastic from start to finish. Frank Muller is perfection in his narration

I loved this book because of the twinge of humor in character descriptions. The story line was great too I thought. My favorite of his so far, definitely worth it - the narrator was fabulous.

I like John Grisham's court dramas, but I loved this book because it is not a court drama. The highly flawed yet appealing character of Nate was like a best friend you can't help rooting for. And Grisham's depiction of a recently recovered alcoholic struggling with keeping his feet on the ground was perfect. Five stars.

Probably my most favorite book by Grisham. Always love the court room scene, but the spiritual aspect of this story was uplifting.

We liked it very much. I’ve read many of John Grisham’s books This was one of my favorites. The plot was exciting, lots of character development.. This book takes you on an adventurous journey into the jungles of Brazil and the courts of Washington DC.. Billions of dollars are at stake and a cast of characters are all lining up to get their share of the inheritance.

The storyline was not very interesting and narration really dragged it down. The positive to this story is that I’m going to get back to regular church attendance.

Loved it. I’ve Come to love all Grisham’s stories. He’s a master story teller. Yes They all seem to have a legal setting or back story but they’re very much more than stories about the law or lawyers. Excellent listen. Highly recommend.

What a pleasant surprise from John Grisham. Certainly a differently styled book with several twists that keep you hooked throughout. I appreciated the sometimes tedious descriptions of characters or events—made the book come alive as the scenes unfolded in real time. Great read!

Admittedly, it's been awhile since I've read a Grisham novel. The story itself was "ok". There were some glaring questions I was left with at the end of the story, so I have mixed feelings regarding the book itself. The Narration, however, I found quite annoying! There was random obnoxious music between chapters/sections of the story, that I found quite annoying. The actual narrator was fine - I actually liked his work. I guess it's the production that I found so grating. That's what knocked my review down to 3 stars.

This book was only 5 discs long. That's ok though because honestly, there is not much happening. Interesting? Yes. but ultimately gratifying? No. Only aspect I liked was how the main character turned to God in order to break his addiction habit. This was nice to hear as I am a Christian.

An enjoyable story - a little different from other John Grisham stories, including the setting of Brazil. Definitely with the time

Thoroughly enjoyable but not the usual Grisham form of captivation. What a great example of the battle between good and evil, even when the good side is so grossly outnumbered and superior in every way known in modern culture. Just one big question remains at the end of the story - what is the history between Rachel and her father or even The history between her father and mother. This book leaves me with a sense of hope and less sense of futility.

Not Grishams best work, I didnt finish the book because the last CD had scratches.

This keeps you on the edge of your seat through the whole book. I realy like this style of Grisham ..... It is a little different from his regular style

Grisham did it again! He kept you interested til the last moment of the story. This narrator kept me listening and not wanting to get out of my car. Therefore, I kept on driving, driving, and driving.

Really could have been a lot better. Grisham tried something a little different and it did not come across too well.

This title is due for release on January 5, 1999
We'll send you an email as soon as it is available!