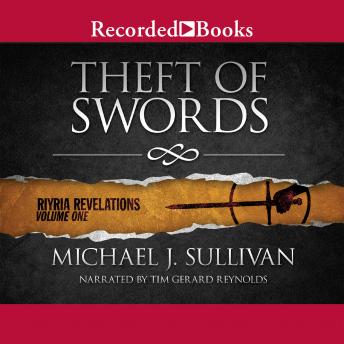 Acclaimed author Michael J. Sullivan created instant best-sellers with his spellbinding Riyria Revelations series. This first volume introduces Royce Melborn and Hadrian Blackwater, two enterprising thieves who end up running for their lives when they're framed for the death of the king. Trapped in a conspiracy bigger than they can imagine, their only hope is unraveling an ancient mystery-before it's too late.

This epic fantasy includes a little breaking and entering, plenty of snarky insults, political intrigue, magical beasts, and a chaotic neutral maimed mage. For me, the tale started off fun but not particularly special. It wasn’t until about a quarter of the way through the book that the tale grabbed me. Royce and Hadrian are a lot of fun. They’ve known each other for years and each is well into their adult years. This was a nice break from all those epic fantasy adventures that feature teen/young adults bumbling through their first adventures. Royce was my favorite because we have the same dark sense of humor and have to sometimes be talked into doing the right thing. Hadrian is an enthusiastic believer in honor and all things good. It’s a very good thing these two have each other to balance things out. Each has a history veiled in questions and half truths. I look forward to Book 2 revealing more on this note. The one weakness to this tale is the ladies. It’s not all bad, but for the most part they are comforters and romantic interests and need to be rescued. Arista shows promise with her wit and ability to grasp politics. Also young Thrace has a shining moment at the end of the novel. The ladies aren’t the worst I’ve seen in epic fantasy but I did want just a bit more from them. There’s a big fat mystery with the elves. Ancient conflict and truces are eluded to and I expect that will become a big deal later in this series. There are a few elvish slaves in some areas of the human realms, but no elves roam free… or if they do, they can pass for human. The maimed mage Esra provides most of what we know about the elves. He’s ancient and was imprisoned for perhaps 900 years (if I recall correctly). Esra is a big enigma. I don’t know what he wants and he might not know either. He has to keep his head down as he’s still a wanted criminal. Then there’s Myron. I adored this character because of his wide eyed wonder of the bigger world. He grew up in a monastery and had never been off the grounds. He had seen a few horse but never rode one and he’s never seen a woman. As he gets swept up into the adventure, he provides several chuckles. I too wish there were blue horses. By the end, I had fallen in love with the main characters. I really look forward to adventuring further with Royce and Hadrian. 4/5 stars. The Narration: Tim Gerard Reynolds gave a great performance for this book. He had distinct voices for all the characters and his female voices were believable. He sounded like he had a lot of fun narrating this story too. I did notice a few short repeats but there were no other technical issues with the recording. I loved his voice for Myron (always full of wonder), his skeptical voice for Royce, and his honorable voice for Hadrian. 4.75/5 stars.

Loved it! Amazed that he wrote the entire series almost all at once. Incredible work of imagination and fantasy.

I absolutely loved it . The first book introduce the characteristics the second book the story gets deeper. It has a lot of twists, a lot of surprises, I enjoyed reading every bit of it. I’ve completed all the six books I wish they bring the story into a TV show sometime in my lifetime.

Really enjoyable story. I found the main characters Royce and Hadrian to be entertaining and fun. Story line is involved but not overly done; I was able to immerse myself in the world without zoning out and losing my 'footing' on the story. It paces itself quite nicely. The narrator does a great job with the voices as well. My only criticism is that I wish Tim Reynolds had maybe given more time to digest tragic moments to give us as a listener more time to process, and even then I'm being a little nit picky.

Enjoyed the story so much I started the next one immediately.

Super dope series. Better twist and surprise then most still not one of the ones im looking for however pretty good. Im looking for something I won’t see coming before it’s revealed lol. Also no annoying choices that makes no sense or does nothing but extend the story lol.

Not game of thrones or lotr think more like the inheritance cycle.

This series of books is not the beginning but don’t let that stop you from looking for more. I am completely hooked on this author, his style of writing and the believable characters.

Loved this book! It's got all the elements fantasy lovers look for. I'm so looking forward to reading the next installment!

I’m addicted! I started this series with book 1 and 2 of the Riyria chronicles then moved on to the Riyria revelations. Which were written before the chronicles. This is not the order that is suggested but I recommend this order as it gives you great information about the characters and flows perfectly into he revelations books.

I enjoy so much of Mister Sullivan's work. While this story is no exception, you will run into some tropes that are always a problem for me. With that said, the characters are enjoyable, the suspense builds, and before you know it, you're racing to the end and enjoying nearly every second of it.

Good read, nice characters, story evolves with some unexpected angles, which keeps the reader interested. One of the few things I didn't like: the second part felt like a second book, totally different location, missing some persons (e.g. Myron the monk) I loved, and seems to be only connected to the first part because the main characters are involved .. oh well, I' m waiting with more critism till the next book!

Classic fantasy. By no means astonishing but definitely no bad.

Great escape from 2020. I recommend the listen.

Absolutely awesome from beginning to the end. Our two heroes are some of the best written characters. Do yourself a favor and listen to all of these books.

Such a great new series for me! I love history and adventure so this was right up my alley but I can see even others who, maybe, like fantasy or comedy finding themselves smiling through the story.

Perfect read for people new to Fantasy. Character driven with very likable Main Characters, World building and magic systems arent that complex but still effective. The reason i think its perfect for Fantasy newbies is because while it is well written classic European type fantasy, it also contains many fantasy tropes that well-read fantasy readers have seen many times before in other books. However for the newly initiated it will be a very new and fresh Buddy adventure set in a very believable fantasy world. Another positive is the Narration. Tim Gerard Reynolds, whom many know from his amazing work on The Red Rising Trilogy by Pierce Brown , among others, does a remarkable job yet again, employing multiple accents, and adding quite a bit humor and emotionality to this book. For avid fantasy readers it may be a bit tropey but overall its a pretty decent read. -Roque-

Loved the story, and the narrator was excellent. Got the second book!

Excellent book. I can’t wait to listen to the next one. Good narration also.

The book was good. A bit disappointed with the end. Too many loose ends. Forcing me to listen to the next book to tidy them up. Narrator was ok. Hard to distinguish the different voices for some characters. Nice voice.

This title is due for release on March 16, 2012
We'll send you an email as soon as it is available!