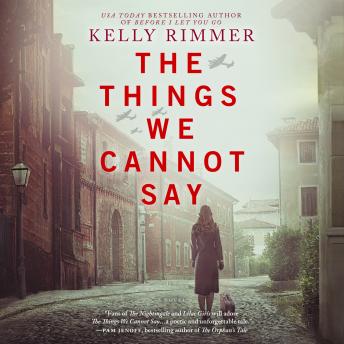 The Things We Cannot Say

From the author of Truths I Never Told You, Before I Let You Go, and the The Warsaw Orphan, Kelly Rimmer’s powerful WWII novel follows a woman’s urgent search for answers to a family mystery that uncovers truths about herself that she never expected.

“Kelly Rimmer has outdone herself. I thought that Before I Let You Go was one of the best novels I had ever read…If you only have time to read one book this year The Things We Cannot Say should be that book. Keep tissues handy.”—Fresh Fiction

In 1942, Europe remains in the relentless grip of war. Just beyond the tents of the refugee camp she calls home, a young woman speaks her wedding vows. It’s a decision that will alter her destiny…and it’s a lie that will remain buried until the next century.

Since she was nine years old, Alina Dziak knew she would marry her best friend, Tomasz. Now fifteen and engaged, Alina is unconcerned by reports of Nazi soldiers at the Polish border, believing her neighbors that they pose no real threat, and dreams instead of the day Tomasz returns from college in Warsaw so they can be married. But little by little, injustice by brutal injustice, the Nazi occupation takes hold, and Alina’s tiny rural village, its families, are divided by fear and hate.

Then, as the fabric of their lives is slowly picked apart, Tomasz disappears. Where Alina used to measure time between visits from her beloved, now she measures the spaces between hope and despair, waiting for word from Tomasz and avoiding the attentions of the soldiers who patrol her parents’ farm. But for now, even deafening silence is preferable to grief.

Slipping between Nazi-occupied Poland and the frenetic pace of modern life, Kelly Rimmer creates an emotional and finely wrought narrative. The Things We Cannot Say is an unshakable reminder of the devastation when truth is silenced…and how it can take a lifetime to find our voice before we learn to trust it.

For more by Kelly Rimmer, look for
Before I Let You Go
Truths I Never Told You
The Warsaw Orphan
The German Wife

I loved this book! So interesting, thoughtful and emotional.

This is a profoundly moving story of love & tribulation in war torn Poland. It is the story of a family coming to grips with its own hidden history & frailties. I picked this as one of my "free" books with no idea what was coming. What a wonderful choice it was. I'll likely read it again.

I enjoyed this book. It was not too graphic and you could still feel the pain and suffering endured by the characters. It’s a story of love, courage and sacrifice. I will seek out other books by this author. I really enjoyed the narrator and the use of accents. Well done!

This has become one of my favorite books. Complex family dynamics and rich historical perspective intertwine in a lovely story about perseverance, love and loyalty.

Loved every minute of it!

I loved this book. I couldn’t put it down. Narrators were great too.

Wonderful historical fiction of a time we shall never forget in fear that we could return to such a society. Irish American, but full of empathy for all that suffered during that time period. Wonderful narration.

one of my favorites, a beautifully written book. Was heart breaking and lovely and the same time. Narration was perfect as well.

This was a beautifully written book . The way they go between the two strong women .. and tell the story .. had me crying .. I really loved it .

The story and the narration are both excellent. Thanks

It is was a beautiful story. The narrator as very talented. While sad, it was informative! Thank you for having it in your library.

Perfect timing of the interwoven story lines. Beautifully heartfelt. Loved every minute. Made me cry.

Absolutely amazing! I couldn’t stop listening. I finished this in 2 days.

I love the way this book was written going back and forth between World War II Poland and current-day America. There is a great family story of finding how to love despite our many differences.

I read a lot of books about the Holocaust and this was another good one, although heartbreaking. The reciting of atrocities committed by the Nazis in this book was consistent with historical records. The narrator who voiced the daughter who traveled to Poland spoke very fast. I repeated checked my device to ensure I hadn't accidentally sped up the narration. The other narration was great.

The story grabs you right from the start. The best audio book I've listened to thus far!

This title is due for release on March 19, 2019
We'll send you an email as soon as it is available!