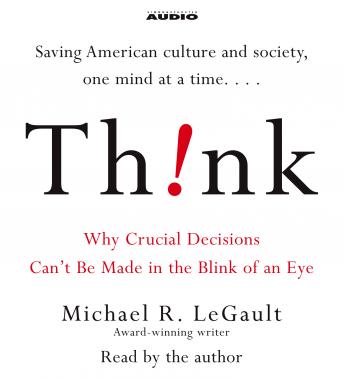 Think!: Why Crucial Decisions Can't Be Made in the Blink of an Eye

Outraged by the downward spiral of intellect and culture, Michael LeGault offers the flip side of Malcolm Gladwell's bestselling phenomenon, Blink, which theorized that our best decision-making is done on impulse, without factual knowledge or critical analysis. If bestselling books are advising us to not think, LeGault argues, it comes as no surprise that sharp, incisive reasoning has become a lost art in the daily life of people everywhere.

Somewhere along the line, the Age of Reason morphed into the Age of Emotion; this systemic erosion is costing time, money, jobs, and lives in the twenty-first century, leading to less fulfilment and growing dysfunction. LeGault provides a bold, controversial, and objective analysis of the causes and solutions for some of the biggest problems facing Western culture in the 21st century. From the over- load of reality TV shows and gossip magazines that have rendered curiosity of the mind and spirit obsolete to permissive parenting and low standards that have caused an academic crisis among our children, LeGault looks at all aspects of modern lives and points to how and where it all went wrong.

I love this book! It is pessimistic and optimistic about the future and the world in general. But clear about the direction he sees things going if we don’t start to engage our intellect.

This title is due for release on January 3, 2006
We'll send you an email as soon as it is available!