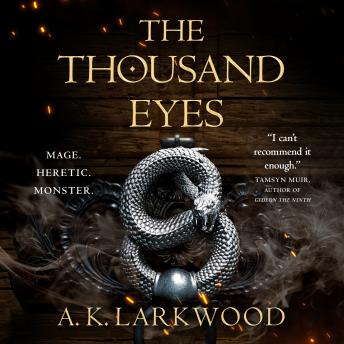 #2 of The Serpent Gates

Just when they thought they were out...

Two years after defying the wizard Belthandros Sethennai and escaping into the great unknown, Csorwe and Shuthmili have made a new life for themselves, hunting for secrets among the ruins of an ancient snake empire.

Along for the ride is Tal Charossa, determined to leave the humiliation and heartbreak of his hometown far behind him, even if it means enduring the company of his old rival and her insufferable girlfriend.

All three of them would be quite happy never to see Sethennai again. But when a routine expedition goes off the rails and a terrifying imperial relic awakens, they find that a common enemy may be all it takes to bring them back into his orbit.

I liked the unspoken name and had been awaiting the second book for what felt like a long time. Really good continuation, a lot of unexpected turns and a very modern fantasy. The narrator was good but the recording wasn't the best. Very dynamic with loud and soft parts, sounded better in headphones than in the car.

This title is due for release on February 15, 2022
We'll send you an email as soon as it is available!