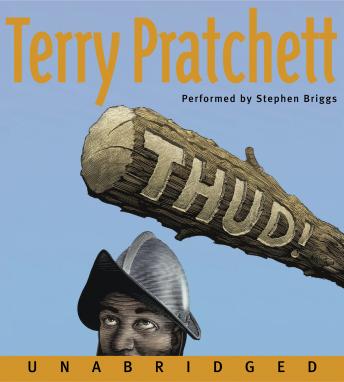 Commander Sam Vimes of the Ankh-Morpork City Watch will be damned if he lets anyone disturb his city's always tentative peace -- and that includes a rabble-rousing dwarf from the sticks who's been stirring up trouble on the eve of the anniversary of one of Discworld's most infamous historical events.

Centuries earlier, in a hellhole called Koom Valley, trolls met dwarfs in bloody combat. Though nobody's quite sure why they fought or who actually won, each species still bears the cultural scars and views the other with simmering animosity. Lately, an influential dwarf, Grag Hamcrusher, has been fomenting unrest among Ankh-Morpork's more diminutive citizens. And it doesn't help matters when the pint-size provocateur is discovered beaten to death ... with a troll club lying nearby.

Vimes knows the well-being of his city depends on his ability to solve the Hamcrusher homicide. But there's more than one corpse waiting for him in the vast mine network the dwarfs have been excavating beneath Ankh-Morpork's streets. A deadly puzzle is pulling Sam Vimes deep into the muck and mire of superstition, hatred, and fear -- and perhaps all the way to Koom Valley itself.

Any one who hasn't read any of the Discworld series is missing out. The City watch are some of my favorite and this may be the best among them.

This is one of my first times encountering the famed City Watch and it certainly was a hell of an introduction. The characters are wonderful, the story is winding and enthralling, the narrator does a magnificent job and the entire thing is just a treat to listen to. I cannot encourage this more even if you aren't a fan or know anything about Discworld.

This title is due for release on September 13, 2005
We'll send you an email as soon as it is available!