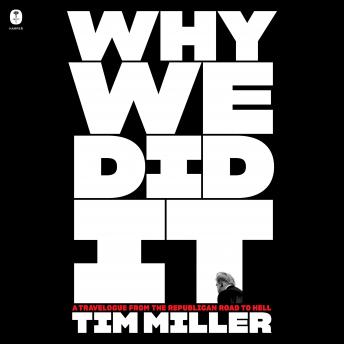 The Why We Did It: A Travelogue from the Republican Road to Hell

Former Republican political operative Tim Miller answers the question no one else has fully grappled with: Why did normal people go along with the worst of Trumpism?

As one of the strategists behind the famous 2012 RNC “autopsy,” Miller conducts his own forensic study on the pungent carcass of the party he used to love, cutting into all the hubris, ambition, idiocy, desperation, and self-deception for everyone to see. In a bracingly honest reflection on both his own past work for the Republican Party and the contortions of his former peers in the GOP establishment, Miller draws a straight line between the actions of the 2000s GOP to the Republican political class's Trumpian takeover, including the horrors of January 6th.

From ruminations on the mental jujitsu that allowed him as a gay man to justify becoming a hitman for homophobes, to astonishingly raw interviews with former colleagues who jumped on the Trump Train, Miller diagrams the flattering and delusional stories GOP operatives tell themselves so they can sleep at night. With a humorous touch he reveals Reince Priebus' neediness, Sean Spicer's desperation, Elise Stefanik and Chris Christie’s raw ambition, and his close friends’ submission to a MAGA psychosis.

Why We Did It is a vital, darkly satirical warning that all the narcissistic justifications that got us to this place still thrive within the Republican party, which means they will continue to make the same mistakes and political calculations that got us here, with disastrous consequences for the nation.

I got bored when the author started trashing individuals. I understand the point, but it would be more interesting if it weren’t such an Reverse PR piece.

This title is due for release on June 28, 2022
We'll send you an email as soon as it is available!