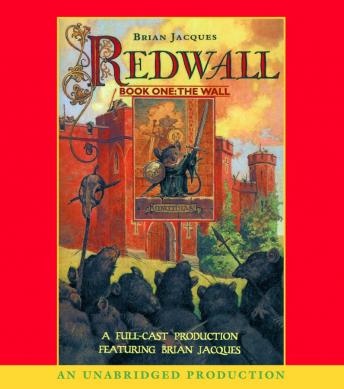 When Redwall was published in 1987 it catapulted author Brian Jacques to international stardom. And small wonder! This enthralling tale is jam-packed with the things we long for in a great adventure: danger, laughter, hairbreadth escapes, tragedy, mystery, a touch of wonder, a truly despicable villain, and a hero we can take to heart.

That hero is Matthias, a young mouse who must rise above his fears and failures to save his friends at Redwall Abbey. The villain is Cluny the Scourge, one of the most deliciously despicable rats of all time. The unforgettable cast of supporting characters includes the stalwart badger Constance, an irrepressible hare named Basil Stag Hare, and the elderly wisemouse Brother Methuselah.

But most of all there is Matthias, seeking his true destiny in a journey that will lead through danger and despair to true wisdom.

To start with the book: It's excellent. I'm 31, so not really it's intended audience, but I never got around to reading them as a kid, and figured I would check it out. It's a great YA fantasy story. There are definitely some cheesy aspects that don't hold us as well as an adult, but I went in with the mindset of who it's for, and I enjoyed it. As for the narration, this is where it falls apart. The main narrator did great. It does have the ever so slight was quality recording that's normal for audio books, since they weren't all the profitable in the past, and so did some of the characters. However, it's pretty apperant not everyone recorded in the same studio. Some people had a slight echo, while others were just terrible. There were moments when I legitimately can't understand what they're saying. Like the main bad guy, Clint, would get angry and start screaming. But not only does it sound like low quality equipment with nothing to dampen the sound, but it sounds like he backed up 20 feet and is telling from across the room. So I have to sometimes rewind that part 4 times just to get all of what he's saying. Would I still recommend it though? Yes. I'm willing to sometimes look past mediocre recordings if I get a great story. If someone wants a YA medieval fantasy with anthromorphic animals, this is a great book.

What a great book! My son and I truly enjoyed this book. There was never a dull moment. The narrator read the book with voice and expression. After listening to the book we watched the cartoon of Redwall, but the cartoon couldn't come close to the greatness of the book.

Excilent story line. I also love that the narrators were different for the different characters. :)

Brilliant! Myself and my two boys (11 and 10yrs) thoroughly enjoyed this book. We are currently busy constructing 'Redwall Abbey' out of Popsicle sticks and one in Minecraft! From both an entertaining and literary point of view this is quality prose for middle school boys - not to mention, for those young at heart.

This title is due for release on September 23, 2003
We'll send you an email as soon as it is available!